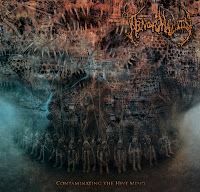 The brutal death sound has always maintained a respectable crowd in New England, but I can't say that it's ever been a hotbed for producing acts in the niche. We've had (and continue to have) a few bands like Goratory, Leukorrhea and Dysentery in my home state of Massachusetts, all of whom are decent, but Abnormality might just be the first band in a few years to happen upon a real shot at success. Their 2010 short player The Collective Calm in Mortal Oblivion showed some promising chops, they managed to land a bonus track on the Rock Band 2 video game, and now they've found a home with Sevared Records, more or less the perfect place for this sound to develop and broach the broader, international audience.

It would be dishonest to claim that the quintet has the most unique style going for it, but certainly there are some inventive twists woven through the songs that add a fresh coat of cement to the bedrock foundation from which they mete out severe aural punishment. Forceful, palm muted burst rhythms are threaded with tremolo guitar progressions and a copious use of dissonant, atmospheric grooves. Those seeking out slam sequences will hardly be disappointed, as a number of tracks like "Monarch Omega", "Hatred Relentless" and "Fabrication of the Enemy" feature harried, enormous breakdowns that feel like the band are bouncing cinder blocks across your face; but they certainly don't pigeonhole themselves into a 'mosh now, mosh only, mosh forever' niche thanks to the surgical explosions of accelerated technicality that keep the pacing varied and the ears affixed to the adventurous guitar players who hold nothing back in their quest up and down and all over the fretboard.

Contaminating the Hive Mind wouldn't be possible without such top notch musicianship, and trust me when I say that in this regard, the band is filled to overflowing, the collective experience of a dozen or more other local groups under their belts, several of which hail from related sounds (Sexcrement, Deconformity, Goratory and so forth). Jay Blaisdell is a storm incarnate, with so much celerity in his hands and feet that he makes the blasting and double bass seem effortless. Guitarists Jeremy Henry and Ben Durgin run the gamut between heavily syncopated rhythmic complexity and spurious, well plotted leads that inject all manner of hysterics into the frenetic architecture of cuts like "Shooting the Messenger". Scene veteran Josh Staples brings up the low end with suitable elasticity, and even though the hugely percussive nature of the music doesn't always favor the bass over the drums and guitars, listen closely and this plunking dynamo will dizzy you with some appreciable finger work. The rhythm section is so tight in conjunction that you'll need a lubricant just to process it.

Also likely to draw attention are Mallika Sundaramurthy's vocals, which have improved considerably over the previous EP, catapulting her into position as one of the better female presences to vomit into a microphone this side of Sinister's ex-growler Rachel Van Mastrigt-Heyzer. Her intonation is deft and guttural, almost like a faster and harder George 'Corpsegrinder' Fisher inundated with wretched spasms of snarling, laying to waste any childish misconceptions that gender defines brutality. I also really enjoy that this band has a more political and dystopian bent to the lyrics somewhat akin to a Suffocation or some of the recent West Coast maulers like Inherit Disease. Heavens know there are enough bands paraphrasing Cannibal Corpse and Mortician; give me a flood of thoughtful, restless and intense imagery with some meaning behind it, any day.

Ultimately, your taste in death metal will go a long ways in tempering your reaction towards an album like this. If you scoff at surgical polish, staggering proficiency, and above all, sheer brutality or have no interest in anything more modern than Sweden, Florida and Incantation circa the early 90s, then chances are this is not going to change your mind. On the other hand, if you were to pull at your roots and unearth the fundamentals established by bands like Suffocation, Cryptopsy and Deeds of Flesh near the close of that decade, or if you find yourself constantly mining the rosters of labels like Unique Leader, Comatose, and Sevared for additional sounds, then this is one case of constant whiplash well worth shelling out the few dollars it will cost you. Contaminating the Hive Mind is a clear success, standing alongside recent efforts from Germany's Pighead and Japanese newcomers Desecravity as one of the better brutal/technical death albums I've heard in 2012.

Posted by autothrall at 9:58 PM