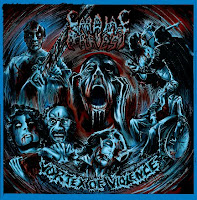 Cardiac Arrest's fourth full-length Vortex of Violence is another grind soaked slab of old school death metal that wisely decides to stay clear of the current, prevalent trends in the medium and carve its own course into the nostalgia of its potential (and pre-installed) audience. You won't hear any of the gaping, cavernous death/doom chasms so popular, or the knockbacks to Sweden in the early 90s, or even a heavy Floridian influence. I'm sure the quartet is well schooled in all these areas, and yet the sound they settle upon is more one of social and psychological unrest once spewed by the death/grind pioneers like Repulsion, Napalm Death or the faster-paced tunes of British war-masters Bolt Thrower or Benediction.

The grimy guitar tone is heavily responsible, as it sounds like someone has hooked an IV up to your veins and pumped a city sewer system through your body. Or trying to floss your teeth with rusted barbed wire. The riffs cycle through streams of primitive tremolo patterns and bombastic chord sequences redolent of albums like Harmony Corruption, Utopia Banished, Mental Funeral, World Downfall, Realm of Chaos and Horrified. Drums maintain a laid back but aggressive stance in the mix, all raw and natural-like, and the bass feels like sentient, distorted ooze that escaped a tar pit one night and decided to stalk the living for their flesh. Vocalist Adam Scott has a broad, blunt guttural that brings back memories of the old British growlers, though they also hurl forth a more surgical snarl where it can amplify the aural destruction. As for the production, I doubt I'd have it any other way than the dry, brutal honestly implemented here, well suited to letting the vocals and instruments breed their own, morbid puerility.

If I'm being honest, I will admit that the tunes don't possess a great deal of variety. They rarely did with this particular style, but I found myself leaning towards the eerie, simplistic leads, or the more clinical, atmospheric riffs heard in the songs "Conjured Beings" or "Ritual Plague", the latter of which feels like it could have been a lost Deceased song from one of their earlier records (never a bad thing). Generally paced at a middle to faster speeds, you do get a sense of redundancy through the 48 minutes, and perhaps the very length is a component to this: normally, bands of this sort keep their tracks reined in at 2-3 minutes, but Cardiac Arrest pen a few which double that length. Granted, they're not exactly monotonous, but with a set of riffs this familiar that are at best only mild alternations on those of their influences, the music does eventually become a little one-note in its execution. But while these might prove obstacles to some listeners, Vortex of Violence still succeeds in meting out another beating nearly as potent as its predecessor Haven for the Insane, and those with a fetish for the late 80s English death outbreak or US cult legends Autopsy, Cianide and Repulsion will appreciate its humble and heartened belligerence.