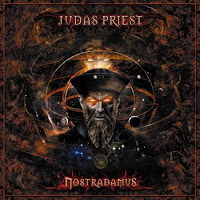 I can't help but wonder what might have been had Judas Priest decided to pursue an experiment like Nostradamus earlier in their career, when they were in full writing capacity and churning out hit after hit. Perhaps they might have chased the idea in place of Point of Entry, or Turbo, or one of their other divisive records. Certainly they've got a front man with the capable range, and all the tools to create a satisfying rock opera concept album, but the problem is that by 2008 they were coming off almost two decades of mediocre music, and this was not really the time to be reaching so far outside the comfort zone. As a result, Nostradamus is a whole lotta ambitious nothing that is effectively one of the saddest studio efforts of their career (and I'm including the 'Ripper' Owens records in that statement). Not for lack of trying, mind you, but for the lack of results.

Hell, they couldn't even make this album LOOK good. Why in the name of the powers would you replace your iconic, wonderful logo with a shitty font like that? Yeah, it's a concept album about Nostradamus, and it makes sense that they were going to showcase the prophet, but it comes off like some cheap Photoshop. I didn't even think the album was real when I first saw this artwork, I felt like someone had played an online hoax. As it stands, I'd rather stare at the cover of Demolition than this eyesore, and that's not even really a cover. Of course, had this been two hours of lightning bliss with the compositional fortitude of a Painkiller of Stained Class than I'd be more than willing to overlook its outer shell, but sadly its lackluster quality does not end at that, but at the 100+ minutes of good intentions gone awry, a bloated and dramatic musical narrative which at its very best rips off past Priest triumphs or revels in haughty, "Carmen Burena"-like nonsense, the caveat being that they focus in on Rob Halford's voice rather than backing choirs.

This was produced by the guitarists, and I must say they didn't do a bad job of it, though it's not so bold and bright and polished as Angel of Retribution before it. The strings and keys swell accordingly to the emotional tension the band thinks its creating, but the real downfall is that across 23 tracks they can't even manage to pull out one that is remotely memorable. The double-album is divided into a series of shorter vignettes that often alternate with 5-8 minute pieces, the latter of which usually contain the harder guitars. The riffs on this song are simply abysmal, pulled from about 35 years of history and loosely paraphrased from metal tunes you've no doubt heard in the past. At the most 'exciting' you'll get a piece like "Persecution" which wants to very much belong to the Painkiller era, only the delivery of vocals and lyrics just don't cut it, and the note progressions feel tired and unsurprising. Others like "Prophecy" try to creep along with a very simple, almost heavy/doom driven riff like something you might have expected on the Halford solo records, and while I can't deny that he manages to conjure up that same, strong character in his voice, the songs really lack excitement.

The leads actually seem like they put some thought into them, but since they're not launched at you from the foundation of killer rhythm guitars, their uphill battle can't seem to reach the summit. Most of the pieces are so heavily multi-tracked with strings and synthesizers that it feels like the soundtrack to some big budget video game, like a God of War score without the menace and bravado. The bass lines are boring, the drums somewhat caged in by the orchestration. Add to this the rather cheesy lyrics in a cut like "Lost Love" and the whole things feels like an immense failure to broaden the band's horizons towards Trans-Siberian Orchestra fans (who don't realize Savatage was better). The worst thing about this is that the ratio of pay-off to duration is frustrating, who wants to listen to two full discs of mediocrity? Perhaps they should have reined in the writing to a single album and given a 'trial run' to the whole concept album, before going overboard. It's hard to believe this even got the green light from Columbia/Epic, but I guess they've just been around so long that they can pull their own strings.

Nostradamus is not the most incompetent bumbling of a career I've heard from a major metal outfit like this one. It's no Virtual XI or St. Anger. In fact, there are elements to its execution which show me that all of the band's constituents still know how to play, in particular Rob's pitch is still quite stunning. But I would be hard pressed to find a more lackluster skeleton in their closet than this one. Okay, Demolition is a sliver worse, but at least we didn't have to spend nearly two hours to find that out. What might have been an interesting, in depth glimpse into the life and times of a near mythic figure is gimped by generic, uninspired lyrics, and weak music that puts bombast above ballast. It's a little late to close my eyes and pretend everything after 1990 didn't happen, but Judas Priest are a long, long way from home here. Time to book a return flight.