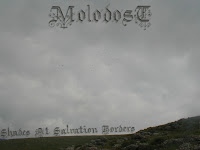 Molodost is a black metal/ambient hybrid hailing from Lebanon of all places, the work of a sole individual (one Raed) painting nightmarescapes through the use of buzzing, heavily distorted guitars, programmed drums, pianos and synthesizers used to represent various instruments. There is a thematic current running through the four original pieces which deals in death, madness, and redemption for a raven who has chosen to forsake its animal identity and explore humanity (as least if my understanding of the notes is correct). Certainly a unique concept here, one that might deserve further exploration, but there are a few flaws in the delivery that leave it underdeveloped musically.

The clear influence to the project is Burzum, not only because Raed has included a cover of Varg's ambient piece "Móti Ragnarǫkum", but in the tortured emotions of the grating vocals, the commitment to such a raw guitar tone and the heavily influence of the synthesizer. The simplicity of the note progression of the viola (and its percussive accompaniment via timpani) is reminiscent of Dauði Baldrs, though he adds some creepy whispers for a further atmosphere. Yet this is no ripoff of the infamous Norse project, because the deeper intonation of the vocals and the sound set Raed uses through the demo is distinct. In fact, the disturbing ambient sequences through the demo, while oft disjointed like the insane intro to "Walls of the Asylum", or the majority of the massive title track with its flurries of dissonant spikes of fuzzed out guitars, are the strongest components.

I did take issue with the drum machine, which seems a bit too loud in the mix and too unrefined in terms of the beats programmed. More like an old industrial record from the 80s, before sampling and beat-sets were advanced through the advent of thousands of software programs. This is not so much a problem in "Shades..." itself, which has a more chaotic geometry, but in "Diaries of a Forgotten Raven" and "Walls of the Asylum" it can become a distraction when joined with the more vulgar, obnoxious guitar lines and Raed's tormented barks. Often the music will devolve into this grating, unnecessary clutter, which conceptually might fit the narrative, but doesn't make for a compelling experience. Also, the actual guitar patterns could use some work, as often they just seem to wander aimlessly about the mix, relying more on their frightening, oppressive tone than their actual composition. Again, it's suitable as mood music in some haven for the insane, but not memorable in of itself.

That said, the one place where the demo nearly comes together is on the Burzum cover. The original was only recorded in the MIDI sound format, so Raed has created this extravagant interpretation by applying the hostile, jangling guitars and it feels enormous and stressful (in a good way). It's still a fairly chaotic deconstruction, but since he was following a proven blueprint to begin with, the landscape is far more focused and harrowing than some of the original tracks. Also, I'd say that aside from some of the instrumental difficulties I had with the drums or guitars, I think Raed does a decent job of production. All the tones are loud and up front, the ambiance is appropriately consuming and he mixes the vocals and guitars like bold phantoms taunting at the listener. From here on out, I think it's just a matter of raising the level of composition to the curious concepts and competent engineering.

Shades of Salvation Borders is only a first demo, so one shouldn't expect the world of it, but its flaws are all easily fixed with further experience in the medium, and I've heard far worse from other one man outfits. I can't say I got a whole lot out of the music, as its clamorous nature often became too much to bear, yet there's clearly a mind here apprised of how to concoct a ghastly, fucked up head trip, so I'm sure further iterations will yield a more effective delve into darkness.