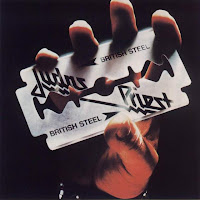 British Steel is not an album requiring much introduction, since it's one of the most popular of Judas Priest's outings and one of the better known in all of the heavy metal spectrum. The English legends had already built up a staggering momentum by the time 1980 struck, and this put them well over the top into the living rooms and tape decks of enthusiasts the world, and many galaxies over. I've met extra-terrestrials from far down the nearest Spiral Arm who have this on their .mp3 player. Seriously, if you've not heard "Breaking the Law" by now then you're either three years old and under (in which case you've probably STILL been exposed to it, just not retained the chorus), or you're from some undiscovered tribe of aboriginals on some uncharted island who worship overhead air traffic as deities; in which case I should not be addressing 'you' in the second-person since it's unlikely you have the Intertrons.

And it makes sense: British Steel is a more commercial venture, not unlike Hell Bent for Leather before it, only far better written. This album is a veritable hit machine, built for radio without abandoning the whole heaviness of the chords and distinctive screaming that got them to that point. Yet, some of the songs are so damned unforgettable that their appeal transcended wide beyond the borders of the metal/hard rock audience, as prevalent as it was through the 80s. Hell, a live version of pretty much the entire album was available to download and play in Rock Band. I have family members two generations removed that know "Living After Midnight". Despite this level of saturation, though, I would find it dishonest to qualify British Steel as one of my very favorites from the band. Essential to own? Probably. Consistent? For the most part. But I've long felt that there were a few chinks in its armor which brokered the album's dominion from an empire to a fiefdom. A killer fiefdom that hosts a large range of jousts and events, mind you, but it couldn't win a war with its more stunning and grandiose siblings like Stained Class, Sin After Sin, Screaming for Vengeance or Painkiller.

I've already mentioned "Breaking the Law", and where would we be without it? The vocal patterns are so pristine that they truly feel as if they've been engraved into the razor blade on the cover along with the logo and album title. The melodic lead-in guitar pattern is a thing of legend, learned by hundreds of thousands of aspiring six-stringers, and the chugging aggression of the chorus is enough to start a riot in any crowd of inebriated or even sober witnesses. Not to mention the atmosphere on the vocals, and the fact that the whole tune clocks in at around 2 and a half minutes. Concise and mother fucking immortal. "Living After Midnight" is the other giant in the room, with its party rock guitars and chorus that might just as well have been attributed to KISS or the Rolling Stones; but then you've got this 'second string' of semi-legendary tracks that have become regulars in the band's set list throughout the decades. The forceful, airy power metal staple "Rapid Fire" which has been emulated to precision in hundreds of cases; the mid-paced stadium anthem "Metal Gods" with its burly chords and laconic but hooky chorus; the dark grooves of "Grinder" and highway ready "Steeler", both of which would spawn bands using the titles as monikers (as other Priest songs had done in the past).

So what's my hangup? The rest of the album. I can forgive "The Rage" for its reggae-like introduction since the chords in the verse swagger with a particular degree of bad-assery, and I enjoy the flecks of rust Rob Halford places on the vocal lines. But the arena anthem "United", despite its cheesy melodic chorus, simply does not stand out to memory, paling in comparison to "Metal Gods" from the very same album, and suffering from a pretty generic guitar riff even for 1980. Not sure why this was chosen for a single. As for "Don't Have to Be Old to Be Wise", I would not have even remembered the song was on British Steel were I not listening again to review it, a pretty bare bones hard rock track without much appeal to the chorus, though it certainly feels classic Priest in its execution. All things considered, neither of these is necessarily a 'bad' song, just painfully average and overshadowed by the many great tracks that would catapult the band even further into the collective metal conscience. Another slight nuisance is the lack of devastating leads. A lot of the songs have them, but they get lost in the shuffle and often feel more atmospheric than impressive, even in the bigger numbers.

Production is good and dry, clean and appropriate for the mainstream steamrolling that the album would take straight to the bank, but perhaps not one of their best in terms of driving the songs into my noggin. This was the first album with new drummer Dave Holland, who would remain with Priest for six studio efforts before Scott Travis came in for Painkiller, but his output isn't all that wild here. Capable and dependable, like most of the albums he would appear on, and certainly heavy enough to add some ballast to the riffing, but not quite the powerhouse equivalent of his successor. Ian Hill's bass is present, but hardly exemplary and I feel it does get lost under the dry, ruddy industrial strength sheen of the chords; while Halford is his normal self, but he's not executing the same screaming and variation that he manifests on earlier (and later) works. Lyrically, too, this was never one of their most interesting records, especially tracks like "United" which have the poignancy of a kindergartner reciting the Pledge of Allegiance while privately thinking how he's going to stealth a few hours on his dad's XBOX later that evening.

In the end, though, the songs really win out here. At least six of them, and British Steel earns its keep despite the sagging, unremarkable middle cuts. Certainly the first 15 minutes of the album are comparable in quality to nearly anything else in their catalog, and its logical that this would be one of their better sellers in England and the States. Heavily promoted, and not surprisingly, defined as a major milestone in the genre due to its success and the utter stickiness of some of the songs.