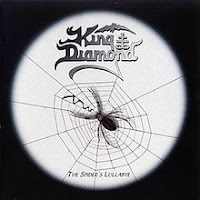 Five consecutive years of home run horror-themed concept albums, and then five years of relative silence. This would be King Diamond's legacy going into the former half of the dreaded 90s, and in a different world, The Spider's Lullabye might have original come out in 1991 and continued the streak. Or at least tried to. That said, the band's sudden absence was not without an understandable reason: Kim Bendix Petersen had reunited with Mercyful Fate for some touring and studio time, which rewarded us with the albums In the Shadows and Time, both of which were surprisingly good, so who could complain? Eventually, Diamond got around to putting together another 'solo' effort, with Andy LaRocque returning and then an entirely new rhythm section consisting of Herb Simonsen (guitars), Chris Estes (bass) and Darrin Anthony (drums).

The Spider's Lullabye is perhaps the last of the 'essential' King Diamond records, or if not essential, then the last of the 'good' King Diamond albums for several years to come. It's got a few issues, especially with the rather lame story (even by the usual Diamond standards, which were not high), and a few duds waiting in the wing...err, webs, but there's enough money riffing here to save it from the flaming pits. Hell, I'm not even sure I could call this album a 'disappointment'. Just about anything might seem lackluster after that 1986-90 period, especially when it ended with The Eye, an unsung masterpiece. As happy as I was that Mercyful Fate had reformed and written some quality material for the first time in a decade, in 1995 I was simply content that Kim was not planning on abandoning his solo material indefinitely, and The Spider's Lullabye is just compensation for the five-year gap even if it was only the calm before the shitstorm abortion The Graveyard, which might have forced me into a deep bout with alcoholism had I not been so busy with the rest of life.

This album is not quite as involved or busy as Conspiracy, nor is it as eloquent and beautiful as The Eye, but it's definitely a manifestation of similar atmosphere to what they were doing in 1990. In particular, the use of the organs as an important backing element to tracks like "The Poltergeist" felt very familiar, and of course the due diligence Diamond gives each of the verse and chorus sequence certainly feels like a natural followup. There is a great deal of versatility in the riffing, from the Sabbath swagger of "To the Morgue" to the rampant melodic speed metal of "Eastmann's Cure" (one of the best songs here), and a distinct lack of narrative interludes or intros to drive the tale. Or tales, rather, since The Spider's Lullabye is only 40% concept album, the final four songs (title track, "Eastmann's Cure", "Room 17" and "To the Morgue") telling the saga of Harry Eastmann, an arachnophobic hermit who ends up in the 'wrong hands', if you will, playing out almost like a Lucio Fulci giallo.  The other tunes all feature their own nods to various horror cliches, with "Six Feet Under" providing a sort of 'alternate' ending to Them/Conspiracy.

King sounds really airy here with his falsetto, though when he's singing about things like, well, spiders, it's a little difficult to take seriously. Not that anyone ever did in the 80s, but at least his shrill wailing was a decent match for ghost stories or witch trials. The riffs are still quite strong in general,driving and creative within the hybrid foundation of speed, heavy, power and thrash metal the band had manifest in the prior decade. Tunes like the fattened "Room 17" literally swell with atmosphere like a corpse bloated with spider hatchlings, but there were only a few in particular which I found as immortal as, say, an "Eye of the Witch" or "Burn". The second song, "Killer" slowly builds through chugging and mid-range sneers to this brilliant, cyclic swagger which almost seems like it would fit right at home on a 'pirate metal' record. "Eastmann's Cure", which I had mentioned was one of the highlights of the album, has a lot of unforgettable, driving melodic elements and a gleaming, spectral chorus to it; while I love the atmosphere during the speed metal rush that develops in "The Poltergeist".

The rest of the tracks are all acceptable, and more than fit the mood of their lyrical themes. This is not an album I can't pull off the shelf and listen through in its entirety, but a number of the compositions have a hard time engraving themselves into my mind. The rhythm section here, while competent enough to do the job, simply doesn't seem as interesting as the old lineup with Patino, Dee and so forth. Thus, the music relies so heavily on Diamond and LaRocque and there's just not coming up with the same level of consistent hooks as they once did. That said, while The Spider's Lullabye was the first of their records that didn't seem to mark a poignant evolution (forward or sideways) in the King Diamond sound, it's still a success, especially in the middle of such a dead period for traditional metal aesthetics, when bands were selling themselves down river to alternative rock, groove metal and so forth. The production is pretty straightforward, with some potency to the rhythm guitars that works in the framework of general heaviness, though I do rue the understated majesty of the prior album.

To sum it up: The Spider's Lullabye might seem a rung or so down the ladder from its predecessors, but when compared to its own, miserable followup The Graveyard it could be considered a work of genius. If you enjoyed any of the classics leading up to it, or Mercyful Fate's In the Shadows, then this is worth the pocket change.