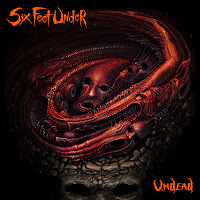 I've made no secret of my disdain for Chris Barnes' post-Corpse venture, Six Feet Under, in the past. At its best, the earliest years of the group envisioned a parallel reality in which Barnes was fronting 90s Obituary, but since that time their canon has produced nothing but vapid ghetto grooves, miserable lyrics and songwriting, and needless albums of cover songs that in general went absolutely nowhere. I'm not saying the band was the worst on the scene, necessarily, but for such a high profile act, I could not help but feel repeatedly underwhelmed at their collective throughput. Sure, they were capable of meting out a handful of entertaining riffs on a few of their albums, and they deserve some credit for never abandoning the death metal genre as a whole, but when contrasting their work to what Barnes' alma mater has achieved with its new front man, I've found it difficult not to deem 6FU pedestrian by comparison.

Forward to the present, and in what must be the shocker of the year, Chris Barnes and guitarist Steve Swanson have actually released an album that isn't merely acceptable, or simply surpassing their previous outings (which would not be saying much, frankly). Undead is hands down memorable and entertaining, and it's time for a jaded bastard like me to gladly chomp down on his boots, choking on the grave soil caught between the soles. What's better, Six Feet Under has not accomplished this feat by abandoning their central use of street ready barbarian grooves or the emphasis on simplistic, visceral lyrics. They haven't suddenly morphed into a brutal/tech death metal act, or shouldered their way aboard the current nostalgic trends of Autopsy/Incantation or recycling Sweden. True, there are a few more brutal elements. No doubt, this is partly due to the expert Jason Suecof mixdown and the newly instated human battering ram Kevin Talley on the drums, but beyond that the simple selection of surgical note progressions and rhythmic variation here feels tangibly menacing. Undead is the most diabolical sounding record Barnes has been involved with since The Bleeding in 1994.

It's not perfect, but at least 7-8 of the dozen songs on this disc are magnificent. Take the lurching verses of "18 Days", for instance, peppered with frightful little proto-Corpse licks and some of Barnes' most blunt and monstrous lyrical depth charges in years; or the wholesale brickhouse slaughter of "Formaldehyde" with its walls of descending tremolo and old school evil. Hearing Kevin Talley implement his harried fills into each sodden groove really lends more authenticity to even the most minimal riffing schematics, and the rest of the band is skin tight as they transition from slower, blasted patterns to death/thrash breakdowns wrought of maddening mosh-stuff. How about that atmospheric, death/sludge element that arrives in "Blood On My Hands"? Entirely unexpected and excellent. Even the vocals on the record are endowed with a seasoning of nuance and variation; for example Barnes' percussive timbre which drives the track "Molest Dead" like a zombie general horny to feast upon the living, or his shuffled delivery over the Prong-like pep coursing through "Delayed Combustion Device".

Lyrically, the album sticks to the gore and murder that Barnes built his career on with Corpse, and even though I wouldn't call anything complex or 'thoughtful' it at least functions as intended. There's no egotistical death metal gangsta bullshit here which makes me want to reach through the recording and strangle the dude, like I found on a few of the prior albums. We've got vampires, serial killers, you name it. The mix is fully 'now', with loads of punch and power to the guitars and clean, balanced drums, yet despite its modernity the array of old school riffs and grooves still date the band as veterans unwilling to shed their roots. A few of the tunes devolve into predictable, uninteresting riff/vocal patterns redolent of the group's mediocre yesterdays, but on the whole, Undead is a coherent, refreshing act of punishment which oozes threat level. My hat's off to the band for this malevolent magnum opus, and I only pray that the paradox this creates will not shower us all in cosmic incineration as the universe retracts its arms in confusion.