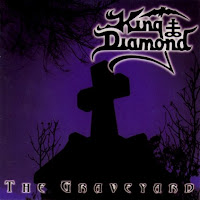 Not only does King Diamond's 7th full-length The Graveyard give off the appearance of boredom incarnate, but its internal compositions radiate the sort of ennui that leads me to wonder why this one even got out the gates. Comprised of material that wouldn't even be fit as an afternoon fly snack for its arachnid-obsessed predecessor, much less the band's brilliant mid through late 80s legacy, it seems like someone had the bright idea to put forth an hour of filler and cash in on the 'brand name' alone. Sure, the music is identifiable as King Diamond, it doesn't exactly break the formula of prior records in terms of its stylistic choices or horror narrative, but that is not enough to spare it from utter vapidity. If this were coming from many other bands, it would seem like mere mediocrity, but from the King, whose standards of quality had been so high (in both his bands) up to this point, it's almost offensive.

The tale itself behind The Graveyard is perhaps one of King's more morbid, possibly even the most socially relevant of his albums, as it involves child molestation, corruption and revenge, but he maintains a supernatural spin on the story thanks the lead character's cemetery obsession. Still, none of this rescues it from a feeling of redundancy, especially in terms of horrible things happening to young girls. Abigail. Missy. Lucy. When will it end? And never before had the intros and interludes on a King Diamond record seemed so worthless and washed up, especially where Petersen presents us with his schizoid array of voices in 'Them'-like vignettes. In fact, the album feels relatively exhausted from the opening piece "The Graveyard" and it never quite builds from that point on. I wouldn't say the man's voice wasn't holding up here, but it seems like a lot of the vocal lines don't seem to have that same level of effort and melodic manipulation he had mastered on earlier outings. The lyrics suck terribly, though some lenience can be applied as they follow the same dialogue-driven format as they always had.

But King's own lackluster showing here is not the album's chief flaw. It's the enormously dry and tedious feel of the production. The guitar tone here is punchy and uninspired, lacking so much of the resonance from the other albums. Perhaps for 1996 this felt like a more 'modern' and sincere approach than saturating the music with so much glitter and screaming resonance, but it feels like they polished off the tracking and barely did anything to lend it effectiveness. It almost has a demo level feel to it which I'm just not buying up. The drums are poppy, the bass is thick but does nothing exciting, and the guitars are at best clinical in the more thrash-oriented riffs, not unlike Flotsam & Jetsam's 1990 disappointment When the Storm Comes Down. Now, if the riffing progressions were more interesting, with even a fraction of the catchiness of The Eye or Abigail, I could forgive the way it sounds, but these too seem hollow, a grab bag of paraphrased patterns from the older albums at best. LaRocque's leads are competent, as usual, but lack the burning mystique they once reveled in.

You're still getting a cross-section of speed/power, thrash and even a little doom/groove to the verses of a track like "Digging Graves" or "Heads on the Wall", but pitifully few of the songs sink their hooks in. Really, I struggled to form any recollection of a single track on the album in leading up to this review. It's one of those cases where I purchased the CD on release, found it a miserable disappointment and promptly placed it on the shelf, to revisit it every few years with the unlikely hope that it might 'grow on me'. The Graveyard seemed like such a shocking dip in quality after The Spider's Lullabye that it really caught me off guard, until I later learned that that album had been written in 1991, just never recorded or released. Thus, The Graveyard might be viewed as the first truly 'new' King Diamond material after the surprisingly solid Mercyful Fate reunion of that decade, and a potentially disastrous portent of things to come.

It would be easy to blame this on a combination of the band's lineup and a phoned in lack of interest from the primary parties (Andy and King), but I also can't help but feel that King in particular hard probably just worked himself into exhaustion by the middle of the 90s, and this is the untimely result (along with some of the underwhelming Fate albums to follow it) of such a high level of productivity. There were far greater disappointments in these years, like Metallica's Load or Slayer's Diabolus in Musica, but The Graveyard certainly scrapes the bottom of the barrel in terms of the King Diamond canon, and is best forgotten by all parties involved and everyone unfortunate enough to have experienced it. Strangely, the album was hardly a 'failure' in terms of its sales, but this was a time when Hootie and the Blowfish were selling gangbusters, so sucking and selling very often coincide.