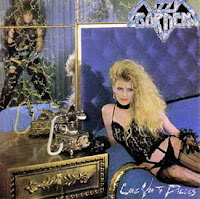 The cover of Love You to Pieces serves as a poster child for the point I was trying to make in the Give 'Em the Axe review, that Lizzy Borden was a gifted band musically that was privy to some poor visual decisions that rendered them a laughingstock to many unwilling to get past them. Is this supposed to be hot? Was she hot in 1985? Was he? I don't recall having any hormonal predilection towards the big-hairs during those impressionable middle or high school years, but beyond that there's the fact this image does absolutely no justice to the music or lyrical content of this album, especially when I could angle my head a few degrees and take in the mysteries of Powerslave, Defenders of the Faith or Ride the Lightning. Granted, not all the lyrics are necessarily great, and yes, there's one tune which is particularly sexual in nature ("Flesheater"), but that doesn't alter the fact that Lizzy Borden just failed as a 'glam' band.

On the other hand, as a METAL band, Love You to Pieces elevated the quintet into one of the best West Coast outfits of its type. Thrash might have been in session by this time, with groups like Metallica, Exodus, Possessed and Slayer taking off, but Lizzy had fully capitalized on the Give 'Em the Axe material with richer, vibrant production values and stronger songwriting, mindful of keeping an 'edge' of aggression here which could cleanly delineate them from the sissy leather 'n lace hard rock acts they paralleled in appearance. This might not be the pinnacle of intricacy for their craft, but a damn fine full-length debut which manages to distinguish itself on nearly every track, while further expanding the ideas and atmosphere manifest in the first two years of their existence. For a band so known by its front man's presentation and piercing timbre, the music is remarkably well structured and delivered, dramatic and explosive enough to place them in the ranks of other hopefuls like Savage Grace, Omen and Liege Lord.

You've got thundering speed metal like "Council for the Caldron" in which the hammering of the drums and the glass ceiling of Borden's vocal patterns create an eloquent and unexpected contrast through which the raving guitar licks and glorious shredding burst like a dragster running laps and burning tires. The emotional and livid desperation of "Warfare" with its flowing melodic chords and unforgettable chorus. If Iron Maiden or the 'Ryche had released that song, it might have generated a hit single, but Lizzy was just too far down on the totem pole. "American Metal" is another barnstormer, a cheesy and effective mid paced anthem slung with microscopic speed licks, eminent percussion and excellent notation building to its sing-a-long climax, and some of the wildest screams the front man had yet pulled off. As laugh out loud as the lyrics might seem, I also really enjoy the music for "Flesheater", while "Godiva" returns to that rapid fire pacing of the opener.

Borden is almost outclassed by his guitarists Gene Allen and Tony Matuzak here, both returning from the EP (alongside the rhythm section). There is constantly some frenetic, playful pattern erupting somewhere above or below the primary chords, or they'll just let the strings resonate atmospherically. This expresses a level of ambition rarely scene out of the borderline glam/metal crowd, and it gives Love You to Pieces this almost incessant replay value which, 27 years later stills seems to hold up. The bass is great, well separated from the six-stringers and Harges' drumming is loaded with fills and muscle that place him well beyond your standard Strip basher. The only caveat to the album is that there are one or two tunes, like "Save Me" or the evolving, titular power ballad which don't seem nearly as catchy as their neighbors.

There were better records in its class for 1985, like Fates Warning's masterpiece The Specter Within or Helloween's vicious melodic speed metal relic Walls of Jericho, but outside of the cover art, there's a true sense of timelessness here which continues to thrill and entertain well beyond the predicted expiration date. I wouldn't say I prefer it to Lizzy's flawless 1987 effort Visual Lies or the ensuing rock opera Master of Disguise, but it's got long legs to stand on and I return to this far more often than the sophomore.