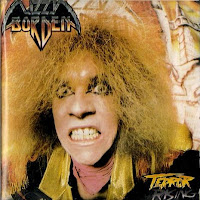 Even though the frizzy and embarrassing cover photo of Borden creates terror of an entirely different nature than that intended, I can't help but feel that this EP is just another example of how these Californians were a class act among their peers. Many groups in the 80s would release singles and other short form releases with merely a few live cuts, or re-edited songs from albums, or other redundant bonus content, yet the content of Terror Rising is wholly exclusive to it, and for a few bucks a fan was getting something new and different. That's not to say this is 'good', because in fact it's their worse release of the 80s. Fans today have the benefit of being able to get this paired up with the Give 'Em the Axe EP on the 1995 Metal Blade re-issue, which features a mildly less freakish Lizzy gritting his teeth in your general direction. A much better deal, since the earlier songs are higher in quality, but I have yet to upgrade my vinyl copy.

Terror Rising is perhaps best known for its cover of The Tubes' 1976 classic "Don't Touch Me There", which also wound up on the Best of Metal Blade Volume 3 collection that dropped in 1988. You might recall that I was a huge fan of the Lizzy Borden rendition of "Live and Let Die", which was included on their live album as well as Best of Metal Blade Volume 2. God, did Metal Blade love this band (Lizzy originals also kicked off both of those comps), and for good reason. This time, they brought on a special guest, Betsy Weiss of label mates Bitch, to perform the vocals as a duet, and the result is something both goofy and endearing. Weiss has a deeper and more manly timbre than Lizzy himself, so you almost get this unusual reversal of gender stereotypes. It's fun, but I don't like it quite as much as the McCartney cover. Less successful though, is the version of Jefferson Airplane's "White Rabbit" which leads off this record. Borden does a decent job belting out the vocals in a rather unpolished production, and the shredding and dual melodies do not do a disservice to the original, but one year later the Seattle group Sanctuary would release a more formidable, marching and ominously psychedelic metalization.

As for the two studio originals on this record, it's another case where they were clearly not going to make the cut for the oncoming new full-length, much like the two that were tacked on to The Murderess Metal Road Show. Only this time, it applies doubly, because that oncoming effort was Visual Lies, the band's masterpiece, and these cuts are the worst of Lizzy Borden's entire history. "Catch Your Death" is a relatively timid mid paced tune that wouldn't be out of place for a band like Journey or Survivor if not for Borden's shrill presence, but its downfall is that the riff progressions are uninspired, predictable, and though the chorus itself isn't terrible, it pales in comparison to anything from the full-lengths. "Terror Rising" itself is incredibly dumb, as if it were the intro to some terrible horror film that never was. You get a few moments of silly interplay between some schmuck character and a pitch-shifted demon voice, and then a brief burst of metal which refrains the title...and that's it. Pretty fucking stupid.

In the end, it's the dearth of quality in these originals which really drags down the value of the EP, placing it well below Give 'Em the Axe. I really appreciate that the four tunes here 'belong' to the release, but other than the occasional fun of breaking out "Don't Touch Me There", this would be hardly an essential for even the most hardcore of devotees to the shock metaller's legacy. That said, it's easy to forgive once you settle down with Visual Lies and marvel. I will say that the vinyl sleeve to the EP goes over well at parties, and might serve you as a reliable deterrent to unwanted sibling/parent intrusions of your private space. Just hang it on your door or in some visible, central location and revel in their disgust. Otherwise, this was not doing Lizzy Borden much of a service, and like the lame images adorning the first and third full-lengths, provided more fuel for the group's detractors to not even remotely consider taking them seriously.