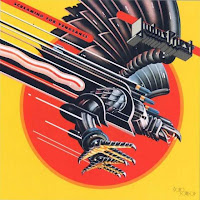 Screaming for Vengeance represented a return to the level of ambition that Judas Priest had seemingly sidetracked for the previous albums British Steel and Point of Entry, but at the same time it also retains those records' flair for production and accessibility. Featuring the first of Doug Johnson's iconic cover trilogy (the stylish, metallic raptor who many bands like Primal Fear would later tweak and adopt as their mascot), this was a smashing success largely due to its major single "You've Got Another Thing Comin'", which experienced so much penetration into Western culture that you'd be hard pressed to find someone who didn't know it that wasn't deaf. But Screaming was and remains quite pleasing in its entirety, the best of Priest's recordings in the 80s, and while it's a few inches shy of perfection, even the worst songs in the roster are a match for nearly anything on Point of Entry.

One of the things that first struck me about the album is its lyrical awareness and even forward thinking nature, which the band had sort of dropped out of with a lot of songs on the few albums leading up to it. Not to say that the lyrics are as complex as some of the 70s material, or that every song here is necessarily deep in intent, but I rather appreciated the relevance of "Electric Eye" and its observations on...well, modern observation. Or corruption ("Bloodstone"). Granted, there are a number of sassy sex songs here like "Fever", "Devil's Child" and so forth, and your typical 'hit the road' feel goodness ("Riding on the Wind") and 'don't fuck with me' anthem ("You've Got Another Thing Comin'"), yet even these seem well handled. Unlike Point of Entry, Screaming for Vengeance seems far more structured and plotted out rather than just spontaneously created in some exotic studio locale to fit a particular theme. But it doesn't hurt that so many of the individual songs are bastions of strong writing and hooks that likely won't escape your memory...ever.

It also doesn't hurt that "You've Got Another Thing Comin'" is either tied with or surpassing "Breaking the Law" as the band's singular, most recognizable song. And at twice the length! The simple chugging in the verses is flush with Halford's diatribe of revenge and rebellion, and the (predictable) chorus is simply a timeless miracle that will probably sound as fresh and poignant in 2082 as it did in 1982. The lead, while not the best in their canon, also seemed a step up from most on the previous two albums, all tying in with the notion that Priest had once again attained some forward momentum here. Remarkably, the rest of the songs on the album are not nearly so popular. The dire melodies that instigate the brief intro "The Helion" are pervasive, and "Electric Eye" has some of the most unforgettable guitars in it since "Breaking the Law" and an ace chorus, but even this was not the hugest hit when the album first arrived. Other notables include "Bloodstone" with its airy screaming in both the verses and chorus, and a pretty sweet intro-lick reminiscent of something Eddie Van Halen might have pulled on one of his group's earlier records. Or "Riding on the Wind" with Dave Holland's opening battery and some cutting highway hard rock that makes it feel like a Point of Entry outtake (only a lot catchier thanks to that harpy chorus).

Priest also shows a softer side at points, but not for very long. Cleaner guitar tones introduce "(Take These) Chains" and "Fever", but it's not long before the chords erupt. Both highly underrated songs, but then, so is everything on this album that isn't named "You've Got Another Thing Comin'". The only tune I'm not a huge fanatic for is "Pain and Pleasure", which implements more or less a swaggering bluesy groove riff in the Zeppelin vein, yet even here the chorus is admittedly pretty good. In total, there is no imbalance to Screaming for Vengeance as there was with its predecessors. I never felt that I was experiencing a glut of creativity or phoned in filler; all the songs are very unified due to the production and pacing, but distinct from one another.

It helps that Rob is really on fire throughout the 39 minutes of the album, relying heavily on the screamed lines that he'd reined in for a few of the recent albums. I don't know about you, but while I appreciate the guy's adventurous nature and willingness to experiment and broaden his range to include its depths, I like it best when he's screeching over the iron-clad mesh of the guitars like acid raining from the sky, and we get plenty of that here. The guitar tone is boxy and effective, the leads spurious but entertaining, certainly some of the most acrobatic they'd yet delivered but still mindful of a good dual melody (as in the title track). The bass once again doesn't do much but follow the guitar, yet you can hear a few of his fills, and this was also the most muscular execution yet from Dave Holland, the powerful pounding undercurrent that the band would further exemplify as they blasted into the late 80s with Ram It Down, and of course the inevitable Painkiller.

Another element that I so love about Screaming for Vengeance is that, while it's immortal in quality, the album is very easily dated to the 80s and influential on so many greats to follow from Europe and the states. The zephyr-like reverb on the instruments, the huge if simple guitar hooks built to fill an arena, this was all a blueprint for hundreds of speed, power and even hard rock acts through the decade, and I really loved this sense of grand production, something we seem to miss in this modern age of excess tracking and digitized over-polish. Not that Screaming for Vengeance isn't 'clean' or mainstream enough sounding to satisfy even the most ardent pop audience, but there's just this sense of glory through the album that I don't get out of Rhapsody or Dragonforce, despite all their advancements in speed and technicality. This is not the best of Priest, but it's very far up the scale, hot enough to burst the mercury from its thermometer.