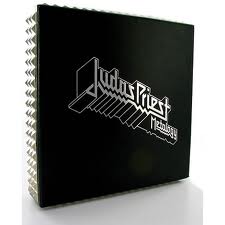 Rather than waste my time and yours vomiting over the dozen or so other approved and unapproved collections of Judas Priest material that have been released into the open arms of suckers through the past 30 years, I'll instead focus on the only one that matters: the special edition Metalogy boxed set from 2004, which features 4 discs and a bonus DVD swathed in mock leather and studs. Now, this thing isn't cheap, it'll probably put you out at least 40 bucks US if you can find it today, but trust me when I say that it's worth the cost for any diehard follower of the band's legacy. There are a few areas in which it could have used some improvement, honing it into a near perfect product, but hands down this is superior to garbage like the Metal Works '73-'93 collection or the Gull cash-in Hero, Hero which muddles with the first two albums, and a damn sight better than the rest.

And it's not the packaging or the sheer wealth of content here that's impressive. No, if Metalogy was a mere reprinting of 65 cuts from the albums with no tinkering, it'd be a heaping helping of useless shit. The audio remastering of every cut on the four audio discs is absolutely phenomenal. In fact, in almost all cases, these are the very versions of the songs I prefer to experience. The leads, the cutting vocals, the reverb levels sound incredibly across all the eras of the band's material, and even though you're not getting the lion's share of their catalog, you're at least getting all the hits that you'd expect at a Priest gig, and then some. In particular, I dug how the selections from Point of Entry and Turbo, two of the band's more divisive albums seem to have a harder edge to them here that makes them flush with the more aggressive material from Ram It Down, Painkiller and so forth. "Desert Plains", "Solar Angels", "Troubleshooter" and "Heading Out to the Highway" sound so fucking great, and the guitar tone on "Turbo Lover" and "Private Property" seems to be brought out a little richer than it was on the original release of the album. The leads take my breath away...and as someone who does not own any of the individual remastered albums, the value skyrocketed.

That said, one of the downsides to Metalogy is that there's very little to no rare content included. Most of the previously unreleased to CD material are live tunes drawn from B-sides or promotional EPs, titles like "The Hellion/Electric Eye", "Grinder", "Breaking the Law", "Starbreaker", etc. Granted, the live songs replace their studio incarnations in the lineup (circumventing any possible redundancy), and sound every bit as great  but I would have loved if there were an entire disc of remastered rarities. As it stands, the only track new to me was the "Heart of a Lion" demo, a leftover from the Turbo sessions, and it's not much to write home about, trumped by just about anything that made it onto that record. Also, I don't see much need in including the Tim 'Ripper' Owens fronted material here. It's tucked gently away on the last four tracks of the fourth audio CD, where it belongs chronologically, but considering how recent this stuff was at the time of the compilation's release I would have rather had four more remastered classics. After all, I dislike Jugulator and Demolition quite a bit and I can't imagine anyone caring about it...

They could have at least clipped these and fattened up the selection from Rocka Rolla, which consists of only "Never Satisfied". But of course they want to acknowledge that sad, sad period of their career...so we can compare and contrast it to how good they were leading up to it?! Otherwise, Metalogy is a beast due solely to the sound quality, and well worth spinning on your car or home stereo as a proxy to the original albums (though you'd be missing a lot of great songs). The DVD included here is a reprint of the old Priest VHS known simply as Judas Priest Live, from a Tennessee gig in 1982, redubbed Live Vengeance '82. Stock, cult footage, nothing special, but nice to have here instead of shelling out for the independent DVD release. At any rate, despite it's rather 'tough' looking exterior, it's packed in there pretty tightly, enough that it might be worth ripping in high quality and then leaving on your rack for display, but aside from that fact and the shocking dearth of rarities, it's the one comp in over 40 years of this band's career you'll want. Skip the bullshit like The Chosen Few (tracks selected by famous metal celebrities) and grab Metalogy while you can still find it.