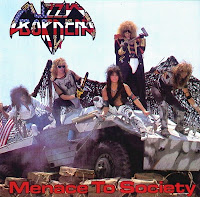 Menace to Society might be my least favorite of the 'classic' Lizzy Borden studio efforts in the 80s, but remarkably it still showed some evolutionary growth from Love You to Pieces, and at least half of its tracks belong on any highlight reel of the Californians' career. Let's also admit that in 1986, there was a HELL of a lot to compete against. Thrash and speed were going supernova, and while there still some superb efforts in the field of more traditional or power metal (Somewhere in Time, Awaken the Guardian, and the Fifth Angel debut for example), even the lowly 12 year olds among us could sense that a 'usurper' had arrived, and that metal was going to continue to expand in a more aggressive dimension.

To their credit, Lizzy actually followed suit, and thus this one of the more hard hitting records in their canon, taking the hugely melodic tropes of the debut and driving them like a fist into the listener's face with a more heightened, dynamic and violent rhythm section. If the cheesy, Twisted Sister-like cover pose, with the band sporting various woodworking tools and riding a camouflaged military vehicle, was any indicator, they were here to offer us a beating this time, and look cool doing it. I mean, look at these gentlemen. "We're not gonna take it", through and through. Despite the fact that any passing avian might roost and nest in their rigid curls, these were guys I wanted to hang around with as a kid. They looked like they might explode at you out of some shitty 80s horror film, piss in the punchbowl at prom and then take all your girlfriends out back for a 'smoke'. Okay, the chainsaw there is a bit wimpy, and might not even threaten a woodchuck, but at least they 'tried' to look menacing to meet your mom's disapproval.

Musically, they pull no punches at all, and once the escalation of the bass and clean guitars that introduce "Generation Aliens" explodes into full velocity, you know that, as with so many of their records, you are in good hands here. I really dug the production on the vocals here, which seemed more focused than the debut, transforming Lizzy's zephyr shrieks into an air force attack, rising and falling like sleek steel birds in the sky as they drop their payloads and seek a greater altitude to escape the ensuing blast. A metric ton of chops, with a lot of tremolo melodies and other techniques picked through the record, and just a general, muscular tone to the rhythm guitar which pushes it Love You to Pieces in presentation. Bassist Mike Davis was catapulting around the undertow of the music like an acrobatic lit up with kerosene, his lines harried and busy, always presenting an additional layer of atmosphere and entertainment.

"Notorious" is always the song I think of first when reflecting on this record, and I'm sure I'm not alone in this. A threatening, imperialistic Roman point of view narrates the tune, yet another example of how the lyrical ambitions of this band so often, vastly exceeded the shallowness of the 'glam' thing they portrayed in their image; but the music rules the roost, loaded with glorious chord sequences, shouts of 'hail Caesar' and an excellent verse/chorus interchange. Others kicking ass include "Ultra Violence" with the Maiden-like trails of the opening guitars, bustling hedgerow of bass and the spikes of shining chords that support the sweltering voice of the front man; the choppy and energetic "Terror on the Town"; and some solid head banging through "Love Kills" and "Menace to Society", the latter of which has a very Saxon feel bisected with a more surgical melodic precision.

I wasn't such a huge proponent for some of the power ballads on the record, like "Bloody Mary" or "Ursa Minor", but they're hardly wimpy; it's just that once the heavier guitars bust out, the riffs all seem rather bland and unstructured compared to the faster pieces on the record. Otherwise, this shit is rock solid. The lyrics are all pretty serious and interesting, covering a wide array of subject material from the personal to the historical, so anyone fearing that they might devolve into a trashy sex/glam metal act where their image and music coincided could rest easy. It's not to pristine as its successor, Visual Lies, one of my favorite albums of the decade, or so compelling as Master of Disguise, but as a strong support that provided the band with more live material and some admittedly great songs to expand their following, Menace to Society more than rose to the occasion. I think much of the target audience was just too busy listening to The Ultimate Sin, Peace Sells... and Master of Puppets to really notice.