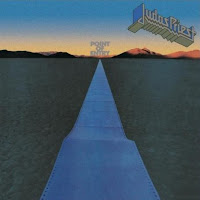 Of all the Judas Priest records up to and including Painkiller, Point of Entry probably received the worst rep. Turbo was more of a divisive side step, clearly it had some great songs and ideas, but not all fans were on board. With Point of Entry, it was more a case that it didn't have a blazing array of hit singles like the two albums before it. The band also moved a fraction further along the axis of accessibility here, and thus there's a bit more of a laid back hard rock vibe throughout the songs, even more so than was heard on British Steel. Clearly the band wanted to write an album of broad hooks and limited aggression, fit for cruising large open spaces like the implied desert/computer paper roadway of the (US) cover, and I think to that extent it's a success. But inevitably, it resembles its predecessor in having a selection of wonderful tunes offset by some obvious filler that proved anything but inspiring, and the ratio of the latter to the former is higher here.

"Heading Out to the Highway" is the only track that most people I know play any lip service to, a straight and somewhat dirty rocker with a glorious chorus that celebrates personal initiatives in life. Motivational metal, but the riffs aren't all that heavy despite the spacious, slicing tone Downing and Tipton draw from their axes. My favorite cuts are actually those in the middle of the record, "Desert Plains" and "Solar Angels". The airy picking and resonant vocals definitely feel like a desert blues, but especially in the former I love the effects created over the chorus and Halford's loner, drifting delivery. "Solar Angels" has some riffing patterns similar to "Heading Out to the Highway", and once again they throw a brief flurry of wild electronic effects which foreshadow Turbo but add a necessary atmosphere to balance out the rather predictable riffing. Of the rest of the songs, however, the only ones I pay much attention to are "Troubleshooter" for its fun, choppy hard rock riffing and "You Say Yes" for that climactic, if silly chorus melody. Others like "Don't Go'" and "Turning Circles" are bland and would be difficult to distinguish from bands like KISS or AC/DC if not for Halford's timbre.

Sonically, this is an album that favors the convertible owner. Roll down the top and just let these songs pound off into the dusty night as you race down the dusk. Internal landscape stereotyping lends me to believe that this would be a far more effective album for a road trip in Arizona, New Mexico, Nevada or California than the band's native United Kingdom. But then, that makes sense, because they wrote and recorded this on the summery Mediterranean isle of Ibiza, and it definitely carries that seasonal aesthetic to it even if it seems better suited to larger stretches of desert than an island. Unlike the previous records, this was more of a sporadic creation of mood, and in a way it's more conceptually unified and consistent than most of their records (save the 1990 magnum opus Painkiller). The guitars and vocals are set just right in the mix, the drums solid and comfortable, the bass taking a backseat to the rest. I wasn't impressed with the leads on this disc but then neither was I all that enamored with them on British Steel. In one ear, out the opposite.

Point of Entry is indeed one of the least impressive of Priest's early offerings (about equal with Rocka Rolla in quality), but I feel like the negative reactions are often misrepresented or overinflated. It's still an enjoyable disc if you're in the proper mood or environment to experience it, even if the riffs and vocal hooks don't match up to the five albums leading up to it. Hell, I'd still take this in a heartbeat over any of the middling-to-crappy studio efforts the band released post-Painkiller, but there's no denying that around 50% of the content is stodgily average for a band who's prior ambitions launched them into the metallic stratosphere. If you're not on a desert drive, with time to kill,  then there's not much reason to visit more than a handful of the songs. The lyrics are in general quite pedestrian. I should point out too that all of the best tunes here are remastered for the Metalogy boxed set compilation (2004) where they sound superior.