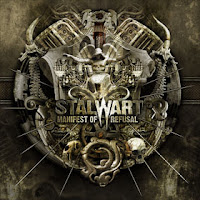 Stalwart is perhaps one of the best kept secrets in Russian extreme metal, because for all the talent and consistency I hear on this album (and the one before it, 2009's Annihilation Begins), they don't seem to have yet gotten the level of press that a band of their potential often receives. With luck this will change, because Manifest of Refusal is another massive statement of intent that will likely thrill a huge cross section of fans. The key to their style is variation, the core being a mixture of mathematical, crushing grooves and more harried flights of brutal death metal, but then, this is really only a start, because they're really not afraid to incorporate anything that will help the songs along. The result is like a conglomeration of aesthetics from bands as diverse as Meshuggah, Fear Factory, Behemoth and Napalm Death.

If you couldn't guess by the cover, the St. Petersburg quintet takes on a very futurist, dystopian aesthetic to the lyrics and visuals that is a great match to their mechanistic bombast. But while they're not averse to incorporate synthesizers and industrial noises from time to time, the backbone here is in the sheer weight of performance. The drums are enormous, the bass plugs along like a feed belt in some factory and the guitars are generally very muscular in and out of their chugging and grooving. The vocals of Oleg Sobolevskiy are a little difficult to pin down, think of heavier early 90s Max Cavalera dowsed in brutal gutturals for most of the heavier sequences, and yet where the band clears for a brooding, darker progressive passage he also takes on this unnerving, eerie aural hue which is near Gothic in delivery. When I referenced Meshuggah earlier, that wasn't to say that Stalwart are some generic djent wannabe, but they have a similar sense for the thick rhythmic grooves that course below the atmospheric dressings like oily blood en route to a rusted, metallic aorta.

Manifest of Refusal certainly favors its heavy side, and at times can feel a little too much to handle since its just so robotic in delivery, but then that's really the point of it. Though there are occasional lapses in the rhythmic forcefulness, like in opener "The Karma Circle" or the later title track with its shuddering, textured whispers against Oleg's primary, tortured vocal passage, the majority of the record is fit for a future in which we've all become slaves to machinery. Don't misunderstand, Stalwart uses its chugging to full effectiveness, even if they're pummeling along some familiar pattern there's a lot else happening to occupy the imagination, but it's like this record were bred for fighting, the music of some smog-covered landscape of smokestacks and oppression where the only escape is in death or succumbing oneself to the industrial gloom. Sure, one could accuse the album of some degree of soullessness, but you'll be slamming your fists and face so hard you won't have one of your own for long. Their best yet, and a high recommendation to fans of heavier modern groove/thrash or mechanical death metal with an open mind and atmospheric relish.