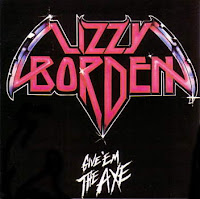 Lizzy Borden certainly struck when the going was hot in the mid 80s, but they had a bit of an issue in which their image and chops didn't exactly line up together, almost as if they wanted to mold themselves into the 'glam scene' in terms of stage presence and photo ops, but perform in a heavier melodic strain reminiscent of the NWOBHM bands that influenced them. Granted, bands like Motley Crue and W.A.S.P. managed to draw from both crowds on their earlier records, back when the distinction between image and genre was a blurrier reality, but Lizzy was quite different than either in their execution. This wasn't the angrier, bluesy hard rock those groups rode to fruition, but more in line with what you'd expect from the emergent sensations Iron Maiden, with driving axe rhythms and glassy leads and melodies strewn out all over the tracks.

'Lizzy' himself was obviously poised as a shock rocker, taking his stage name from the dual patricide/matricide of the New England woman in the late 19th century. But unlike a King Diamond or Alice Cooper, his chosen appearance wasn't cast in the gloom of black and white face paint, but a more outrageous, hair spray heavy look like a crossbreed of T. Rex and a serial killer circus clown. It was admittedly not that popular an image among underground fans of the period, and still serves as a hurdle to many would be followers retroactively. I recall having a very hard time finding other locals into the group, even in my commercial glam-metal obsessed high school: they might not be necessarily turned off by the photo spreads, but once they heard Borden's shrill, piercing tones and riffing more complex than Poison and Bon Jovi pumping out the speakers, they would lose all interest. Unfortunate, but in the end, their loss, because this was a fantastic band writing some of the best traditional/speed and proto-power metal in the US alongside groups like Omen or Helstar.

Give 'Em the Axe was the usual 'teaser' EP that the band put out as a feeler after their demo in '83. Metal Blade had snapped up the band fairly early on in their existence, and this was used to test the waters for the ensuing full-length Love You to Pieces. The material here is more or less a direct setup for that record, and thus understandably the songs are not quite so memorable or rounded, but at the very least they grant a taste of the band's bustling guitar work and strikingly serious attitude towards the songwriting. This is no frivolous tit rock circa the Sunset Strip, but some righteous and aggressive heavy metal with flowing, Maiden-esque leads scaling the walls of "Kiss of Death", and an admirable performance from the rhythm section of Mike Davis and Joey Scott Harges. Above all, though, this was the introduction for many to Lizzy's distinct, ear piercing cries, which would make or break the band's potential fan base.

Surely this guy came up on a diet of Freddy Mercury, Rob Halford and Ronny James Dio, but I find it more interesting to compare him to the falsetto screamer King Diamond, or a less controlled Midnight or Cyriis. His timbre is definitely one of those divisive, 'love it or hate it' styles, crystalline and unquestionable irritable if one were to look at it as some pandering to the negative stereotypes of metal screamers in the 80s. That said, I happen to side with the former camp, and I really enjoy the wavering edge to his tone, almost like it were the serrated edge of some savage blade. He's got great pitch, an obvious range to rival the giants of the 80s, and yet something uniquely fragile, like a wounded animal. Listening to these old Lizzy records in my bedroom used to drive my family absolutely batshit, which ended up in a never ending supply of headphones for Christmas and birthday gifts.

As for the songs here, there are three originals and one cover of Rainbow's "Long Live Rock'n' Roll", which, while a competent transformation, is hardly the highlight of the EP (I prefer their later rendition of "Live and Let Die"). The Lizzy Borden tunes are all reined in around the 2:30-3:00 mark, and provide an ample insight into the shredding potential and excitement, but despite a few impressive licks in "Kiss of Death" I just can't say that these are as memorable as a "Warfare", "Flesheater" or "American Metal". There is some variation, with the title track manifest in a more hard rock laced pace akin to Twisted Sister, "Kiss of Death" invested in a more epic, traditional metal swagger, and "No Time to Lose" reliant more on sheer velocity, but the chorus sequences simply never engraved themselves deeply in my memory.

That said, despite the brevity of the recording and the questionable pinkness of its bladed logo, there's not much complaining. It does the job, it sets you up to anticipate the band's next move and boy would they deliver. I'm not sure of the availability of the original EP these days; you're more likely to acquire it on the 1995 Metal Blade reissue alongside Terror Rising, but fans of Love You to Pieces or Menace to Society might not wish to live without it.