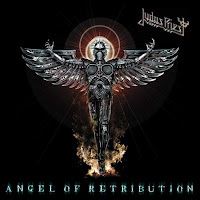 I, like just about everyone, was shocked when Rob Halford parted ways with Judas Priest in the 90s. The blokes were really on top of their game. They'd managed to breathe fire and passion into their traditional formula to produce the greatest record in their career, and there was no question in anyone of sound mind's mind that they were and would remain the metal gods we grew up with. But then, like with so many other great acts, it happened. The chicken flew the coop, to land only at a bad series of thrash/groove albums and industrial rock mediocrity that could never compete with or further the legacy he left behind. Eventually, he came to his senses and began putting out heavy metal records again in his eponymous solo outfit, but by then the damage had already been done, the void had widened to the point that, despite his cavalier efforts, Tim 'Ripper' Owens was about to be swallowed into it.

What's not a shock: after two weak albums, the guys would work out their differences and return Halford to the fold. And who doesn't? There was money to be made, nostalgia to be cashiered, and midlife (or past midlife) crises to avert. Of course he was getting back together with the band, barring an untimely death, and it was only a matter of when. The when was 2003, and two years later we had a new studio album in our hands, Angel of Retribution, its proud Painkiller-like winged angel in armor spreading for the artist while it tiptoed through the flames. Metal fire. Metal meltdown fire. Unfortunately, anyone hoping that 15 years of proper studio association was going to inspire a dream comeback record was sadly mistaken, for this is just not that great of an effort. It TRIES to be, and in terms of sheer audio spectacle, it's hands down one of the best produced albums of the band's career, Roy Z more than earning his paycheck, but even after seven years I can't think of a single song on Angel that I would feel compelled to return to were I not concluding this discography of reviews.

This is essentially a lot of old ideas dressed in a sparkling new suit, and I can't help but feel that the band were pushing hard to play 'catch up', to create an album that was just cohesive enough that the fans wouldn't pull their ears off and trample them in the offal. Why else include all the self-referential lyrical bullshit? To that effect, Angel of Retribution is certainly no failure. The songs flow well enough in sequence, the tones are all loud, the album lacks for none of the heaviness of its predecessor while still managing to draw on the more accessible hard rock inflected albums of Priest past. Seriously, this is just as clean cut as anything Z  produced for Bruce Dickinson, and more importantly, Halford doesn't sound as if he'd skipped a beat in the 15 years since he'd helmed an album for this lot. The guy kept busy in the interim, after all, and his pipes seem just as capable of hitting their youthful heights as ever, even if he has the maturation to restrain himself for much of the run time.

Unfortunately, while a few of the songs 'rock', they don't exactly roll out the red carpet into my memory. A number like "Deal with the Devil" is pure power metal electricity, only by 2005 the riffs had all been played a thousand times by Germanic groups who were biting off Priest to begin with. "Revolution" sounds like the bastard stepchild of Jane's Addiction's "Mountain Song" and some old Sabbath (like "Sweat Leaf"), only it runs out of steam real quick with its sassy, whiny chorus; definitely feels like something that would have made it onto a Halford solo record as filler. "Judas Priest" is a competent if average opener, the measured charge of the guitars reminds me a lot of how Omen used to structure their songs in the early 80s, though the vocals sound nothing alike and the guitars are less Maiden-esque. "Demonizer" is perhaps the heaviest tune on the album, matching the harder cuts off Jugulator or Resurrection in groove power, but while it's entertaining to hear Rob stretch himself for the chorus, and I love the bubbly lead noises, it's just not as catchy as it needs to be...

Angel of Retribution gets a little ambitious at the end with the 13+ minute "Lochness", but despite the doomed trawl it moves at, there is just no way in the 21st century of making this particular legend cool. Especially if you've seen the Penn & Teller "Bullshit!" episode about cryptozoology, or that episode of Celebrity Deathmatch in which a claymation Nessie battles Bigfoot. Still, at least this experiment is 'contained' to some slow, steady riffing and harmonized choruses, unlike the following double album Nostradamus where they bit off far more than they could chew. The worst here is probably "Angel" itself, because as competent as Halford is, I really have no need for a Judas Priest power ballad anymore. "Eulogy" also uses clean guitars, but it's shorter and more downcast in nature (though not much better). Others I could skip on include the pedestrian rock of "Worth Fighting For", or "Wheels of Fire" which is an attempt to recapture the pacing and catchiness of "You've Got Another Thing Comin'" (at least one lick in there seems strikingly similar).

All told, though, this is not an utter fuck-up for a comeback effort, and even the weaker tracks are far from horrible. I just didn't care, and still don't. When I can dial back a few years and listen to Resurrection, or even a few of the better songs on its successor Crucible, or anything 1990 and earlier from the Priest canon, there's no need for something sub-par. I don't think there's a single song on this album that anyone would consider a 'hit'. If the British steel-mongers were out to prove that they still had 'what it takes', then I say they followed through. They can still pick up their instruments and write a metal record for the studio. Now let's move past that and write some goddamn screamers again. Is there another "Breakin' the Law" in you, Judas Priest? Another "Exciter"? Because, frankly, the world could use one.