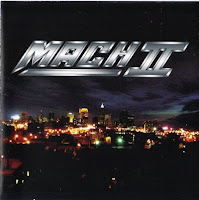 Mach II is more or less a 'supergroup' of the Ohio underground, a bunch of long time headbangers and hard rockers getting together to perform the music that inspired them as kids, long before the advent of extreme metal (that many of the roster have since taken up). Boasting a lineup that is either involved or was once aligned with acts like Midnight, Toxic Holocaust, Soulless, Nunslaughter and Destructor is definitely one way to perk up an avid listener, but more importantly, there are guys here who have been fighting the metallic fight since the 80s, from bands I never even heard of as a teen; so there is no question that this is a project borne of an authentic interest rather than a berth on the bandwagon of trendy relapsed hair metal or Spinal Tap wannabes that have reared their heads over the past half-decade.

That said, the sound these gentlemen have put together is 100% throwback, raw attitude rock that culls its songwriting from influences like KISS, Scorpions, AC/DC, or working class 80s NWOBHM from across the pond ala Saxon or Wolfsbane. You're not going to hear anything present that's any heavier than, say, W.A.S.P., and even that's a stretch despite the speed metal surges. The guitar riffs definitely capture that old blues-based hard rock vibe of the 70s and 80s, so prevalent in its transfer to popular radio/MTV, but they keep busy enough, slathered in a subtle crunch rather then a heap of distortion, keeping with the (old) times. You definitely get the feeling as you listen through the album that you're sitting in a rehearsal room with these guys, the warm ministrations of tube amps fluctuating through the dirty chords. All of the performances are pretty clear, with a nice clappy mix for the cymbals and kicks, and a decent swell of bass distinguishing it from the rhythm guitar, but the most noteworthy element is going to be the vocals of Mike Sorg, which are entirely down to earth, dead end blue collar in tone yet still able to carry enough melody to keep the varied tracks from becoming samey...

He's not got an enormous range, or even an acid harmony to his voice like a Vince Neil (more a Blaze Bayley), but he definitely sets up a mood as if you're listening to him on stage in some rundown bar through a haze of cigarette smoke, and the only beer you could afford with your hack paycheck. The leads didn't really stand out to me, only because a lot of the bluesy wailing seems to trite to me after hearing it for a million years, but they're par for the course for the aesthetic this band represents. I also dug the inclusion of three live tracks performed in Cleveland the year this album was released; they're a bit raucous and rumbly in spots, but you can tell the guitar tone really carries well in a club setting, as do the vocals. All in all, this is not so much an amazing debut as a study in aural comfort, especially for those of us who look back on the 80s with such fondness, having consciously lived through them as more than a fetus. Some of the harder hitting tracks like "Demon Queen" and "Stay Loud" will certainly thrill nostalgia seekers, and I think there's even a bit of speed metal crossover appeal for acts like Speedwolf and Midnight (though Mach II is less heavy). Fit for cruisin', boozin' and bruisin', if not steamy enough for a strip club.