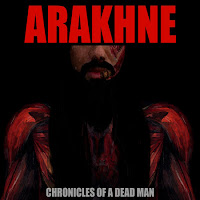 Arakhne is another of those bands that arrives out of seemingly thin air and then proceeds to make you feel really bad about your own, sorry ineptitude and lack of productivity. A cursory glance of the cover image and song titles doesn't really prepare for the bone breaking you are about to receive, but once it comes to the meat of the matter, I have to admit to being taken aback by how much effort was put into this set of songs. Self-produced, performed by only two individuals (multi instrumentalist/vocalist Raúl Cerna and drummer Samus Paulicelli, who guests here from Decrepit Birth), an album like this really has its work cut out for it, and it more than earns its paycheck; it pulls a double-shift and earns a lot of overtime. I'll be blunt: Chronicles of a Dead Man has a few minor production hurdles, and it's not the most innovative or unique sound, but the duo should rest assured that this is 48 minutes of mayhem which a listener is unlike to tire from. No, any exhaustion would simply stem from how hard, and how often, the songs apply their boots and fists to your body.

Aside from a handful of misleading, dirty thrash/groove riffs, Arakhne perform a pummeling, fast-based brand of death metal which plays like a hybrid of Krisiun, Hate Eternal and Behemoth, with hints of early standbys like Deicide, Morbid Angel and Vader. The riffs are legion, and conjured with an enormous amount of acrobatic detail, in particular Cerna's flashy flurries of complex picking that snake about the spines of the rhythmic battery like serpents on steroids. There are probably as many riffs here as there are miles to the planet Mars, and almost all of them fit into the punishing puzzle of aggression; from simpler breakdowns to meaty arpeggio runs that seem more functional than flashy in execution. The leads are all meticulously crafted and affected to stand out against the more complex, unending tirades of the rhythm guitar. In terms of technique, they're all relatively shred-worthy, but even if they're not that distinct or original, they do a lot to counterbalance that belligerent undercurrent in the writing. The drummer is a storm given flesh, and though I didn't feel as if the beats were perfectly mixed here, often muscling in on the other instruments when Samus erupts into an impressive blast beat, it's not such a common event that it warrants much complaint.

If the album suffers from any setbacks, they'd probably be in the last of really distinguished bass playing on the album. In Arakhne's defense, Cerna's already pulling triple duties here with the guitars, vocals, and the engineering album, but where I can even discern the bass, it simply seems to whip along behind the guitar, and considering how dextrous and proficient the music is elsewhere, it'd be great to have more standalone sequences where the low end could shine, or just vary it up under the blitz of the rhythm guitar. Also, though the poor man's David Vincent/Steve Tucker style vocals are a perfect match to this style, and delivered with due competent, I would have enjoyed a little more emotional variation, perhaps some streams to offset some of the bruising bluntness, or maybe just mangle up the inflection so it seems more murderous. Otherwise, the talent here cannot be understated; even the longer pieces like "Dead Men Tell No Tales" and "Surrender" succeed on the interchange of rhythms, leads, and throwing new twists at the listener. For a self-released album, Chronicles of a Dead Man exceeds even what a lot of industry veterans are capable of. Ambitious, relatively intense, and with a few tiny tweaks, this is a contender band. No question.

Free download of the album is available at: http://www.arakhne.com/