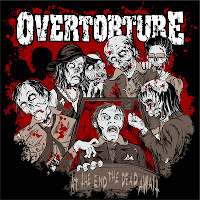 The world is at a point now where it's become so over saturated with the derivative 'Swedish' styled death metal band that it really takes a group of relentless riff-mongers to write impressively within the field. I mention this as I feel that Overtorture survive the cut of the critical scythe by accomplishing just that: enough variation and punishment through the 10 tracks of their debut that you very quickly forget this is bound to be a knockoff, and you simply settle in for some fun with their material. After all, some of the members here actually DO have history in some of those formative bands. So, does At the End the Dead Await sound a little like Dismember? Sure. Grave? Positive. Entombed? Indubitably, but the comparisons are easy to scrape past as you begin nodding your chin to the loping, meaty grooves and swampy, churning guitar tone.

This is not a band to apply itself to rigidly to particular tempos or riffing styles, and as a result the sounds being emitted from the speakers invoke a wide array of influences, from their Swedish peers and forebears to hints of Floridian brutality, Dutch explosiveness and even a smidgeon of Bolt Thrower when they're hitting a slower, morbid, warlike breakdown. From tremolo picked patterns to swerving chords, morbidly effulgent dual harmony spikes and putrid palm muted pummeling, you are never exactly treated to the same repetitive patterns on any two songs here. The vocals are a pretty par for the course, guttural growl, but at least they leave a few of the flaws and gravelly sustains into the production so it's never too monotonous (though branching out more wouldn't be a bad thing). The bass drums and fills are abrasive and intense enough to support the thick pungency of the rhythm guitar, and the lead tones are pretty fantastic as they snake off from the central riffing barrage. They definitely hit a bit of a technical/clinical area with several of the tracks like "Suffer As One"; perhaps not bafflingly complex for the 2010s, but stuff like this was once pretty cutting edge for the early 90s (Suffocation, Sinister, Morbid Angel, etc).

I also enjoy the amount of effort placed in some of the simpler riff constructions, which throw you just enough with some dissonance or melody that you never get a feeling Overtorture is predictable. Granted, the actual note progressions are about 50/50 between average and memorable, but for the most part I was unable to turn my attention away from the album as it tore through track after track of ballistic aggression, and there were a few slammy moments where I wanted to kick my chair back and hurl my headphones at a wall (in a good way). Production here is paramount, with perhaps my one beef being that the bass lines seem far too subdued into the guitar tone. Otherwise, a very wholesome and rich mix for those who love their metal old but up to today's studio standards of volume and clarity. I will admit that I found the cartoonish artwork of the cover and the boring logo to be subpar for the music itself, but these are minor aesthetic quips in the overall scheme, and At the End the Dead Await is worth hearing if you're a fanatic for old bands like Grave and Seance, or more recent devotees like Feral, Mr. Death, Entrails, Corpsessed, etc.