Abominable Putridity - In the End of Human Existence (2012) 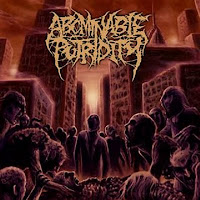 So, as I was planning to roll out my series of mosh-oriented workout videos, painstakingly transferred to the good old VHS format, I was contacted by an international patent organization that the idea had already been snapped up by a group of Moscovians working under the corporate handle of Abominable Putridity. Angered at the news, I nonetheless sought out their first film, In the End of Human Existence, to get a closer look at the competition. Suffice to say, there's very little chance I'll be breaking into this market any time soon, because these Russians seem to have a knack for knuckle sandwich metal that affirms the buzz surrounding them. My only hope is that internal squabbling or poor sales might tear them apart, that I might later sweep in like a vulture of brocore fitness and stake my claim on this emergent trend in entertainment...

Abominable Putridity, at least on this debut, provides a definitive blueprint for brutal slam death techniques, albeit a generic one that's about as interesting as arranging vocabulary blocks in kindergarten. Though the production levels are nothing to scoff at, and the musicianship is about as taut as you'd expect, there are simply no ideas here which haven't been lifted off about 15 years worth of brutal death breakdowns, and then rendered down to the simple principle of palm muted belligerence entirely devoid of melody or truly interesting chord progressions. Take a few Suffocation, Cannibal Corpse or Earth Crisis chugs, and then base about 23 minutes of music around just these. That's not to imply that the Russians are necessarily bad at carving out their niche on this debut, it's just that there are too few unexpected dressings, glimmers of hope or individual songs that distinguish themselves from one another (with one exception). In the End of Human Existence is damn fucking consistent, I'll grant it that, but in this case I'm not using that adjective in a strictly complementary sense...because musically this is as memorable as tying your shoelaces.

The primary concern is the riffing configurations, which are little more than the same half-dozen chords or notes re-arranged into similar, bouncing structures that creep along at half-step intervals on the fretboard. Once in a blue moon they'll break out some wilder, open chords, or even a small handful of more clinical harmonic patterns to the notation, but the lion's share of the material here is moving at a mid-paced groove and then occasionally lapsing into some slower chug, very often embellished with the same end-phrase squealing that has become so uninspired and drone-like to the genre. It's not that Abominal Putridity do not encourage some small degree of variation, wherein plodding, neanderthal numbers like "Entrails Full of Vermin" are marginally contrasted against the roughneck tank-tread rumble of "Victims Stuffed with Nails", but the rhythmic dynamism is just not broad enough to fill even a short album like this.

There is next to nothing in terms of atmospheric flourish, and I can only imagine, for example, just how much a little of that immediate, wondrous industrial resonance of the titular outro track would have improved the central songwriting if it had been induced to several of the bridges. Or what some eerie leads or melodies might have accomplished above the churning, fist-balling flesh of the rhythm guitars. The bass is clearly felt through the recording, but it never does anything besides cling to the guitar patterns...even a few fifths or individualistic runs could have dramatically upped the ante. Drums are mixed with an almost mechanical din to them, but otherwise they offer the proper balance of muscular double-bass rolls and grooves, and heavily favor the kicks and toms to the weaker cymbal strikes. The vocals are an ominous frog guttural which, to its credit, never go so far over the top that they reduce the material to silliness; in fact, they fit the notation like a cock to a condom, but despite their broad and clamorous depth, their bouncing, often hip hopping syllabic are decidely monotonous beyond just a few lines.

I enjoyed a few of the minor aesthetics here, like the band logo, John Zig's great zombie apocalype artwork, the ghoulish interlude "Dissected from Within", and the aforementioned industrial/ambient closer, but despite its brevity, In the End of Human Existence is a slog to experience in more than brief spurts. The song titles and themes are little more than paraphrased from many of the group's forebears, and the musical structure is all too samey without providing intense or interesting riff progressions so the listener can ignore that fact. In truth, there are a handful of bands out there like Kraanium or Ingested who have succeeded in much the same base formula, so it's not impossible to pull off; but both seem superior at putting the notes together. I can't say I really developed much of a hate-on for the Russians' debut. It's not as if the band is incompetent. Meathead metal mission accomplished. But considering the level of hype once surrounding it (at least in this particular niche of a niche), I expected much more than this. Time to return some videotapes.