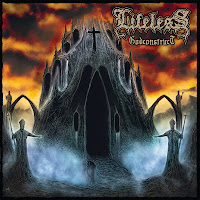 Yet another in the explosion of 'new old school'/NWOSDM death metal acts hailing from Europe, Lifeless' 2010 debut was a successful if not incredibly memorable slab of death metal that drew its craftsmanship from the US, UK, and Swedish scenes circa 1988-1993, with a heavier emphasis on the third. Now, knowing just how many bands have been churning out records in the vein of a Left Hand Path, Clandestine or Life an Ever Flowing Stream these past 5 years, you can bet that these Germans faced (and continue to face) some stiff competition, but I've found in a number of cases that such bands, though derivative at first, tend to branch out for their followups and even progress. Sadly, that's not so much the case for Godconstruct, a festering fruit that simply does not fall that far from the twisted tree that spawned it. Which is going to be subjectively good or bad based on who you ask: got room for another of these sorts of records? Becoming jaded? Losing track of them all?

To be fair, these guys are no worse than a few score of comparable acts who see death metal as more of a means of resurrecting their own relationship to the genre; what brought them under its rotten wings in the first place. The riffs here are probably as well formed as on he debut, and the production a fraction bolder and brighter. The blunt, bloodied edge of the guttural vocal still hits a listener with the same impact, but they also layer on some ghastly snarls and even some van Drunen-style vocals (as in "Sworn to Death", which for all I know could be the Man himself). They know how to set up their sacrilegious overtone of their album with a nice, chanted intro; and carry this through the use of organs and synths ("Moribund", etc) to good effect alongside the brutal riffage. You get a decently balanced onslaught of meaty chords and tremolo picked riffs that evoke a fusion of Left Hand Path and Scream Bloody Gore, and there was a certain oppressive steadiness to the rolling double-bass drum lines and churning low end palm mutes which recalled a peppier rendition of 90s Bolt Thrower. These guys will rarely lapse into dull songwriting claptrap, choosing instead to keep a melody roving along the range of the rhythm guitar, and I laud some of the piercing leads that erupt into a piece like "Blindead" that give it yet another dimension of tonality.

The brick wall I kept running into here was just the album's general lack of distinction in such a crowded field that has already burst its picket fence to overflow. The guitar riffs and song structures were never exceptional when compared to the band's influences, nor did they really build upon that legacy in any meaningful way. Where groups like Tribulation, Morbus Chron, Necrovation, Repugnant and Corrosive Carcass all up the game with either supreme riffing intensity, strange atmospheric quirks or just an added layer of repulsive, hideous grime to the guitar tone, Lifeless seems to be more safely nestled into the middle of the herd, safely consuming and redistributing ideas that hit their stride (and peak) two decades ago. For some listeners, that is not a bad quality. Certainly these Germans have good taste, and can play their instruments, but if after numerous spins, 50 minutes of death metal in 2013 does little more than make me want to revisit other albums from 1993 (or earlier), then I can't exactly sing it the highest of praises. Godconstruct is by no means a bad album. It had its moments, and won't disappoint anyone already in love with the Lifeless debut, or related acts like their label mates/countrymen Chapel of Disease (who they recently put out a split with); but I wouldn't mind a bit more ambition and individuality.