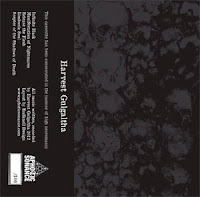 Probably one of the most oblique and unassuming works I've received lately for coverave, Harvest Gulgaltha's first demo is also one of the most devastating, compacting so much tortured emotion into a blend of death, black and doom metal aesthetics that you have to wonder if whoever wrote and recorded this is even still alive?! I don't have much information on the project, other than that it's a US band who have released this as a limited edition, handnumbered cassette through Aphotic Sonance, a label which also harbors the nightmarish black metal act Sjenovik. But, really, as obfuscated as its membership might be, as hidden its creators from the light of recognition, the message in this music is perfectly clear: you are all very fucking dead, and let this ritual serve as a reminder.

Complexity is not in the cards for Harvest Gulgaltha, but instead the most bare bones, simplistic chord progressions and primal death metal picking patterns, especially in the first track "Infinite Black", which spends much of its time bouncing back and forth between two notes; or the finale "Scepter of the Shadows of Death", which is nearly drone/doom in construction, like a darker, shadowy Neurosis. Just a hint of dissonance. The purpose here isn't to wow a listener with musicianship, but to club him/her over the head slowly and repeatedly. It works, and pretty damn well, thanks to the steadied, ebon ichor of the bass lines, the rich textural depth of the guitar tone and the forceful grooves of the drumming. That's not to say that the demo consists solely of slower material, because there are a few tracks like "Manifestation of Nightmares" which pick up the pace to a blackened death metal surge, but even then the riffs are all pretty familiar and the primary motif is the dense, roiling mass of the vocals, which are basically sirens of oblivion, grating and hoarse death metal gutturals laced with screams...almost like the guy is slowly jerking out his own entrails with a rusted, sharp tool in step with the rhythm of the drums and guitars.

Normally I wouldn't go out for such a primitive aesthetic, but Harvest Gulgaltha had me convinced despite itself, due to the sheer weight of the performance. Even if I've heard these riffs (or similar progressions) a thousand times in the past, the intensity of how they are delivered on this demo cannot be ignored. It's just as hypnotic as sitting in a rehearsal space while your friends, drunken and drugged, hook into a minimalistic groove and just let it hang there, the natural ambiance of the drudging, evil chords enough to create the nightmare stuff of woken hallucinations. I've had a similar reaction to this demo after drinking too much absinthe. It's not rocket science: these primates are blissfully unconcerned with technicality, progression, melody, or anything else beyond the impending escape unto death and emptiness, but there is certainly a place for a recording like this which can so effortlessly drain your soul while bruising and blackening your exterior. Kills you inside out, outside in. No light awaits you in these depths, not even the faintest spark.