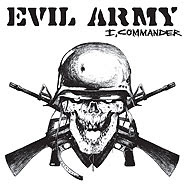 It's a wonder Evil Army hasn't blown up with more of a radius by this point, since their no frills, back-to-basics formula seems as if it would hold an inherent appeal to many fans of 80s thrash, speed, crossover. Let's face it? Have you been to gigs lately? I have, and I've been seeing more of these teens and 20-somethings sporting denim and leather 'compilations' of their favorite band patches than even the late 80s, when I myself was most obsessed with the practice. Many of these would be proud to bear the Evil Army cloth, and the fraternal Tennessee duo's simplistic demo and album covers seem perfectly fit as patches. Yet another detail of how they've gone straight back to the demo era of the early through mid 80s to fine tune their blistering aesthetics, and at least done some justice to the medium without devolving into high school pizza party thrash.

So yes, expect nothing here that sounds as if it could be dated past 1986-7. Evil Army is clearly a huge advocate of that proto-German sound, which explains the vocals which are a pretty clear imitation of Tom Angelripper and Mille Petrozza, with a harsh, sleazy bark which sounds like he smokes gunpowder and broken glass like crack cocaine; to the extent, really, that if I didn't know any better, I'd swear Rob Evil had a European accent much like his idols. The guitar progressions are pure, vicious speed metal in the vein of early Tankard or Iron Angel; dirty tones that sound like they were recorded in a garage somewhere, sound-proofed with aluminum trash can lids. Leads are spurious and sloppy, hardly the product of excess edits and overdubs, more of like someone would just rip out on a whim. The drums are brash and splash, without a lot of bass depth, but furious as they burst along to the unapologetic speed of the rhythms. Mostly though, this is just a feral sort of no-nonsense junkyard thrash which feels like a Teutonic interpretation of the Road Warrior films manifested into audio.

One of the tracks, "Ashes of the Nuclear Fire" seems a bit more muddy than the others, with a thicker bass end to the mix that pops along, so there's a whiff of inconsistency when listening through, but all in all, this is made for people who want a violent, thrash metal boot camp to the face, free of complexity, melody, and anything hinging on progress (which is both a strength and weakness, depending on who you'd ask). I wasn't in love with the material, if simply because I've heard it all many times before and there aren't any new ideas or ridiculously good songwriting to elevate beyond the median of quality, but it's good to hear that they're still putting out music. I know they took a hiatus for a couple years after Rob was incarcerated, and the bassist Bones had sadly passed away, which stuck a fork in their momentum; but the tunes here haven't really skipped a beat from their eponymous debut in 2006, and there's no argument that this is the 'real deal', or at least it was 25-28 years ago. Fans of records like Endless Pain, Finished With the Dogs, Sentence of Death, Zombie Attack, Obsessed by Cruelty, who seek that sort of authenticity should enjoy this, also those into more crossover-focused acts like Children of Technology.