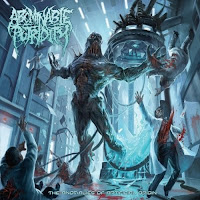 Five years might not seem like a long period against the grand sum of 'human existence', but in the development of a band's songwriting skill and technical ability it can prove an eternity. Russians Abominable Putridity enforce this sentiment by putting their time to good use, and releasing a sophomore which loses absolutely none of the belligerent, bone-breaking ballast of its predecessor, while simultaneously adding a lot of variation and further brutal/tech death metal concessions to the riffing matrix that simply make for a more enjoyable, pummeling experience in the end. In short: In the End of Human Existence might have sufficed for a few 14 year-olds venting their anger in the pit on a Friday night at an all-ages gig, but there is something in The Anomalies of Artificial Origin for the rest of us too, and through this transition they don't seem to have alienated anyone but the most nitpicking neanderthals out to troll the universe.

Note: this is not an exponential 'progression', it simply capitalizes on any plausible strengths of the Russians' mosh-first foundation by threading in a more exciting frenzy of distractions that in turn help the grooves to really smack down the listener once they arrive. Tremolo runs, arpeggio fits and blast beats are surely not novel to brutal death metal, but for Abominable Putridity they assist in dispersing the monotonous thuggery of the near constant breakdowns. Which you'll hear PLENTY of, mind you, in their usual procession of mid-paced palm-muted patterns that refrain and then slow to a brawl-worthy crawl; but even here the notes selected are just a fraction more interesting in rolling behemoths like "A Burial for the Abandoned" and the kinetic, constantly engaging title track which hints at smatterings of everything from Deicide and Cannibal Corpse style riff cycles to spasms of Decapitated or Necrophagist. The individual riffs aren't really all that special, granted, but where the debut was a whole lot of 'miss', you're at least getting a handful of hits this time out.

The mix of the album is slightly more polished than the debut, suitable for the increased use of brief flurries of leads; but I felt that the crunch of the guitars was quite comparable. The drums are better balanced against themselves, but probably a little lighter in contrast to the guitar than on the debut. The bassist does still plug along beneath the guitar for most of the 26 minute play-length, but the increased presence of dual harmony or lead runs ensure that he gets a lot more chance for his fills to really pop out along the undertow. Once clear area of improvement is in the use of American Matti Way (Pathology, Cinerary, etc) to perform the vocals here. He does his best to remain loyal to the prior front man, but he's got this inherent flexibility to his timbre which is ultimately more dynamic across the chortling rasps, gurgles and sustained depths of guttural spew. The man isn't just emulating some abandoned, static toilet bowl; people actually come along to use this thing, leave a few friends off and then flush after themselves through Way's shifting intonations.

All in all, is The Anomalies of Artificial Origins a 'good' album? That I can't say for certainty, since only a few of the songs like "Wormhole Inversion", "A Massacre in the North", or the title cut felt inspiring enough to want to keep revisiting them. I would be unlikely to break this out over hundreds of other brutal or tech death metal efforts unless I was truly in the mood for something baseline, polished and MMA-trained. The lyrics are pretty well written but all over the place, from specific scenes of torture and mortality to broader examinations of civilization, science and religion, congealed into a sci-fi crust. Ultimately, though, it kicks the tits off the debut, and those in the mood for some slam which takes itself seriously enough not to string you along with the monotonous, stifling armpit stench of unwashed ennui could do far worse than check this out. Others who prefer a pure 90s pounding in the vein of mid-era Suffocation, sans any further innovation might also dig it.