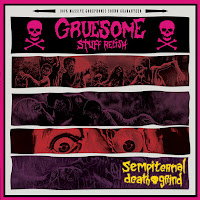 Not long ago, I covered an earlier Gruesome Stuff Relish record, Horror Rises from the Tomb, as a part of an October horror-metal theme month. I wasn't a big fan of that release, for the same reason I'm often underwhelmed by much of this grindcore or deathgrind in the wake of the Carcass/Repulsion legacy. It basically comes down to this: just because you're obsessed with horror movies, punkish fuck-all attitude and your gory precursors, doesn't really mean that you can write albums full of riffless, recycled rhythmic tropes and abrasive production values and expect to slide on by. Structure and songwriting still apply, and it's only the rare band that recognizes this which seem to put albums of note in this particular field of extremity. With their third album Sempiternal Death Grind (which I can only assume takes its title as a spoof of the old Dutch death band's moniker), I feel like these Spaniards have taken a step towards providing a more wholesome, entertaining experience, if not an entire leap or bound in that direction.

This is a mass of ripping, flesh-shearing guitars and blood-dripping, splatter-gore vocals which once again falls under the categorization of Carcass banner-men. Thanks to a very bright and brash production and a varied enough palette of riffing dynamics, though, it manages to remain concise, concussive, and even enjoyable for much of its 37 minute length. The distortion is harsh enough that, at its busiest, it might become a fraction difficult to follow closely, but Gruesome Stuff Relish actually compensate for this by providing a lot of accessibility in the spikes of surgical, atonal melodies that spark up from the rhythmic bone saws. Tracks like "They Are the Plague" and "In Death We Breath" aren't contributing a lot of novelty to the genre, but the constant flux between driving D-beat rhythms and vile twists of archaic death metal notation does keep the ear affixed as the blades descend. Add to this the thick, monstrous bass, which isn't itself very standout but definitely gives the riffing some added breadth and texture; and the nice, clean snap of that snare drum, very audible alongside the denser guitar tone, and you've got a fairly pleasant knife in the eyes.

I also did dig the use of organs and synthesizers to consistently affirm the band's giallo/horror influence, it definitely is another example of how the band are atmospherically evolving. In truth, I wouldn't mind some more of this to help differentiate the Spaniards from other like-minded outfits, but I realize that too much orchestration/effects would create a stigma for many of the band's likely fanbase. The vocals here are no less than what you'd expect, a pairing of snarls and guttural grunts, but I'll also give some credit that the raspier inflection seems like someone has just thrown up, the throat is full of bile and each line is delivered with a real, painful nastiness that pushes it past mere acceptability into gruesome entertainment. Another strong point are the breaks, as in "S.O.S.", where you get that thick, pulsating, distorted bass and the more whispered, dry vocals and background effects. Sempiternal Death Grind is not overall a massive evolution of Gruesome's style, and in truth there are very few memorable riffs you'll feel summoned back to after about 15 minutes, but I will say without hesitation that its appreciable subtleties make it the best record I've heard from them to date.