Sjenovik - On the Infinite Universe and Worlds (2012) 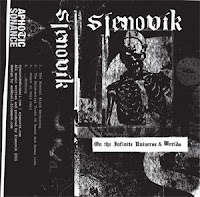 The US black metal underground is in a state of flux at the moment, with two of its most infamous practitioners in somewhat of a hiatus from the medium. Malefic (Xasthur) has turned his attention to acoustic music, and who can say how much more output we'll be getting from Wrest (Leviathan), who has also slowed down for real life reasons. Well, I'd cast a vote into a hat any day for a band like Arizona's Sjenovik to take up some of that slack. Primal and inventive in equal measures, they've got a specific take on the genre that, while certainly comparable to other tortured specters of the past, seems quite renewed and fresh, as it strips down to the raw components of the style and then slightly reinvents them to provide a truly visceral, compelling and ultimately harrowing listen.

On the Infinite Universe and Worlds is a short album, admittedly, with just four tracks and not specifically lengthy ones at that. It's also a lot less experimental than its predecessor, the excellent Zephaniah (2009), removing many of the atmospheric elements like keys, or the noisy soundscapes like what manifest in the perturbing but incredibly "Day of Wrath". This yields more of a metallic core, plodding along for most of its duration at a measured pace, with lots of double-bass driven rhythms that occasionally break into a faster, more traditional fit of speed. The riffing style is straight black metal: tremolo picked progressions that are just dissonant enough to precipitate an unsettling darkness on the listener, but hardly chaotic or calamitous. A bit of a Scandinavian architecture to their composition, with a lineage from Burzum, Darkthrone or Ildjarn, but only in terms of mood and surface tension. The bass is loaded with slight and immersive grooves that help compensate for the fact that a lot of the guitars are cycled quite repetitiously. It's not very complex in structure, but the tracks are actually pretty varied. For instance, the closer "...Nothing" is more melodic and airy than those leading up to it, with just a hint of a 'blackgaze' appeal, but it's still aesthetically consistent with the remainder of the cassette.

Where this is really different is in the drumming and vocals. Sure, the techniques of the percussion are nothing out of the ordinary, but the duo's focus on playing slow as the rule and not the exception, giving the music a more warlike, deliberate effect than if they were running off into blast beats for most of the play length. The vocals are absolutely incredible, blood-curdling cries that come across more emotionally than the lion's share of raspers you'll hear across the underground. Burzum-like in origin, but the level of isolation and suffering they contribute to the music immediately elevates the simpler riff-set and the subtle curves of the bass. This sounds like someone parched and freezing to death on some cold desert night, voicing the experience to the uncaring stars above, and it scared the piss out of me much like a great black metal front man always should. I'd hazard a guess that On the Infinite Universe and Worlds, despite its stripped down nature, will hold more appeal to those interested in the atmospheric spectrum of the genre; acts like Mortualia and maybe the less ambient Lunar Aurora material.

Be warned, though, Sjenovik is not your average Scandinavian blast fest laden with obvious tremolo melodies, corpse paint and spikes. This is lonely, painful, personal, and hollow, best served out of earshot of other human beings who just wouldn't understand. In summation, this obviously didn't evoke that same wealth of noise and suffering that so captivated me on the sophomore album, but nonetheless it delivers an effectively nihilistic, emotionally crippling experience in the short time it allows itself. Suicide from your speakers.