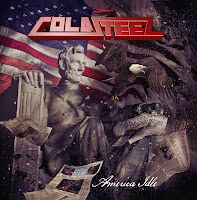 Though thrash metal was perhaps my greatest singular musical fascination in the late 80s, Coldsteel was not a band that caught my imagination or attention. I had a vague recollection of their logo and their 1992 debut Freakboy, which was frankly a bit late on the scene to make much of an impact on anyone. I can recall some iron-clad guitar tones, a nastier vocal inflection, and a good use of rhythmics, but the songs on that album shot straight into one ear and out the other, as did the corny cover artwork, which in the band's defense was improved for last year's reissue. Now, after disbanding in 1993, the band is in a period of renewed interest, with both that re-release and a collection of demos that was also put out in 2012 through StormSpell, and now this EP of new material.

America Idle (witty, I admit) is hardly a reinvention of Coldsteel's brisk old school power/thrash aesthetic, but to give the New Yorkers some credit, I'd say they've done a great job of 'updating' themselves to sound as if they belong in this decade. There are hints of 90s groove/thrash dispersed throughout the songs, but in general this is a good blend of meaty, aggressive guitars and more expansive, engaging power metal structure you might recollect from bands like Vicious Rumors, Abattoir, and Apocrypha back around 1990, or perhaps a bit of Testament influence circa The Ritual or Low, or the earlier Anthrax material with John Bush in the band (Sound of White Noise). Some depth and dual-harmonies in the riffing go a long way ("Ashes to Ashes" in particular). The lyrics harbor relevant social and political themes, and the vocals of Troy Norr seem mildly less goofy than they were on the old material. He's got an angry, thick, barking inflection married well to the occasional gang shouts, and he'll occasionally incorporate some nice screams and melodies to contrast against the thuggishness he normally radiates. The guitars, also provided by an older member (Joe Shavel) have a lot of drive and enthusiasm to them which alternates between chugging thrash hymns and storming pseudo-tech power metal, very evenly balanced against the consistency of the rhythm section.

The guys are not above braking for a brief acoustic segue, or even fucking with techno (the intro to "Blood Secrets"), and I'd say they've got a matured sense for pacing and ensuring the listener never becomes bored with their ideas. That said, I found a few missteps throughout the track list, like the uppity prog/groove thrash of "Blink of an Eye" which came off like a mildly cheesy combination of Prong and Ugly Kid Joe until the chorus kicked in, and "You Lose" suffered from a few uninteresting guitar rhythms. Neither was annoying enough to fully put me off the kinetic vibe the New Yorkers eschew, but I do hope any full length in the works hinges more on material like "America Idle" or "Ashes to Ashes", which are honestly the best tunes I've ever heard them write, clobbering their 90s fare. I'd go as far as to call "Ashes to Ashes" excellent. So, overall, while I wasn't obsessed with this disc, it was fun enough for several spins, the production was quite good, and it's such a rare thing that a band launches a 'comeback' which is superior to their old stuff. Looking for a missing link between East Coast obscurities like Slaughter House and Wargasm, and the power thrust of Agent Steel, Realm or Toxik? Look no further.