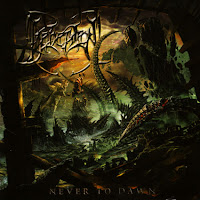 Never to Dawn is one of those records which I could hurl a hundred compliments at, and yet still, when the dust of all that praise cleared, I'd have to admit that I didn't derive a wealth of enjoyment from it. The fourth Beheaded full-length, and second for Unique Leader, it does actually steer the Maltese band's sound away from its predecessors into a slightly more unique realm, and it's easily the best produced in terms of the drumming, the guitar tone, the vocals, and the use of a few decently timed samples. The cover art is phenomenal, while sort of keeping the theme of its predecessor Ominous Bloodline, but strangely enough, it lacks some of the dark depth and density of that disc. Don't get me wrong, this is still intense and meticulous death metal, but it honestly has more of an organic feel to it through the higher studio standards implemented.

Where before, Beheaded were perhaps all too easily comparable to a number of other pummeling brutal death bands like Deeds of Flesh, Internal Suffering, or Suffocation, this album often reminded me of acts like Hate Eternal, Diabolic, Cannibal Corpse, with perhaps a few touches of Polish extremity circa Behemoth or Vader's blast sequences, and loads of Morbid Angel grooves. Christ Brincat has never sounded better than here, and in fact I'd go as far as to say the mix of his drums simply crushes anything on the earlier works presenting us with a lot of clarity into just how hard (and often) he hits, how intricate his footwork. The rhythm guitars in pieces like "Elapsed in the Vortex of Extin" are choppy and explosive, with a lot of the band's forward firing palm mutes interspersed in decent tremolo patterns, which at their most corpulent (the closing moments of "The Ancient Acumen") often entailed a little Swedish harmonic death influence. The bass guitar wasn't often sticking out for me, but at least I could hear it battering away down there like a mallet. Most impressive were some of the lead sequences, like in "Elapsed...", where they hit that great groove in the bridge, really taking the whole experience to another level. I only wish there were a few more comparable moments of excitement through the 3/4 of an hour the album lasts.

In the tradition of never having the same vocalist twice on any full-length, they've got another new one here named Frank Calleja, and he's hands down the most distinct they've had yet, capable of not only molding himself to the bands blunter guttural barrage, but leaving a trail of ground up organs in his wake with a nasty snarl not unlike the Floridian forebears like John Tardy, or coughing up some gruel like Peter of Vader. In fact, you can just feel this dude reaching into his gut to pull out these tortured, blood gargling tones and it adds a lot of depth and character. For this and numerous other reasons, Never to Dawn is hard to deny as a creative, production pinnacle for the group, at least since Perpetual Mockery; the caveat is that a lot of the songs really don't stand out to me in their entirely. There are some great parts, sure, and I really dug the mostly instrumental "Towards an Abducted Sun" and both the first and last tunes, but overall this was always a step or two below mind-blowing and I was eagerly awaiting more explosive, memorable note progressions that just never came to be. Ultimately, it's a very professional, seasoned brutal death outing, and fans of Morbid Angel, Hate Eternal, Severed Savior, Vader and late 90s Kataklysm should check it out and see what they think.