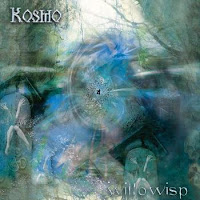 Though the involved acts haven't created quite the ripple they deserve these past few decades, Italy has long been a hotbed for progressive death metal projects. Some, like Illogicist or Gory Blister, take the post-1990 aesthetics of Death and Cynic to another level of harried composition, while others, like Sadist, have struck a more fertile territory of jazzy inclinations, which they've been performing just as long as higher profile outfits (Pestilence, Atheist, etc). This last reference is quite important, because Will 'o' Wisp possess quite a similar rhythmic discourse to Sadist, in particular the masterful Season in Silence (2010) or the eponymous Sadist (2007). Interestingly, one of that band's former drummers (Oinos) is a part of this group, who have themselves been around for quite some time, releasing a few efforts over a decade past which I've simply never heard. This latest effort, Kosmo is their third official album, and the first since 2001; so considering this gulf of time, it's impressive that they've constructed such a solid and compelling selection of tunes.

Let me clear the air: yes, this sounds like Sadist, quite a lot in fact, but not to the point where I felt like it didn't have much of its own to offer. Season in Silence was an album I truly enjoyed, and continue to spin to the point that I'm expecting my CD to crack. But I might argue that Will 'o' Wisp are a bit more indulgent and experimental than their neighbors, and it's this sense of fearlessness that I really admired in Kosmo. To better define what they're chasing, think what Season in Silence might have sounded like if it were influenced less by jazzy/fusion works, and more by experimental 70s or 80s electronic music; anything from Goblin to Kraftwerk. Metallic instrumentation is the dominant force here, with loads of chops and a busy rhythm section second to none, but they'll often throw in exotic, Middle Eastern or Oriental instrumentation or eerie female vocals to round out the pummeling undercurrent of meaty guitars, rampant bass and drums. Some of the synthesizer tones and beats in the more experimental pieces like "Going Back (My Samsara)" might seem a fraction cheesy or antique for those with no investment in immersive old school industrial, electronic or progressive rock and metal, but I found them wonderful and inventive addictions that often trumped the harder hitting components of the songs.

Will 'o' Wisp implement a denser and more bludgeoning guitar sound than Sadist, but otherwise the riffs bear a similar load of shifting rhythmic impact. What was interesting is how they can alternate between a less friendly, more punishing framework and then some fits of accessible chord patterns, especially the lead sequence in "Kosmos" itself which is, to put it bluntly, beautifully explosive and memorable. That said, I didn't find there to be quite so many catchy pairings of synth and guitar as I'd have liked, and aside from giving a sense of scripted kinetics to the music, the riffs only stick with the mind about 50% of the time. The bass lines are enormously well written, busy and perhaps to an extent improvisational, lending crucial depth to even the simplest of death/thrash guitar progressions, and the drummer offers a meticulous, aggressive back beat and nuanced fills without becoming overly technical or difficult to follow. The vocals of Deimos have that loud, visceral sneer reminiscent of Kelly Schaeffer or Trevor Nadir; basically a more brutal Schuldiner style, which you'll either love or hate based upon your reaction to comparable records like Piece of Time, Season in Silence, or Omnipotent Convocation.

I did find the latter half of the record, starting at the sixth track to be marginally more interesting than the first 4-5 cuts, but not a single song passes without some distinct rhythmic idea. The random swaths of synthesizer, the tireless, thumping bass lines, and the dense production keep the listener's blood flowing throughout, but I almost wish they had incorporated even MORE of their bizarre diversions to balance off the heavier material, if only because it seems like the stranger the album gets, the more unforgettable. Tracks like "Going Back (My Samsara)" and "Bardo Thodol" are clear indicators of Will 'o' Wisp's sense of adventure, and I wouldn't have minded if this eclectic style was threaded more evenly through the remainder of the disc. Granted, I'm a pretty open-minded guy, and much of the Italians' audience is probably there for the death thrash metal, but Kosmo feels like it hovers right at the precipice of genius and afraid to drop off the edge. That said, this is still pretty damn good, from the introspective, deeply philosophical lyrics to the musical execution, and it begs the question: why I haven't heard them before? Well worth checking out if you're into any of the other names I've dropped in the review (especially Sadist).