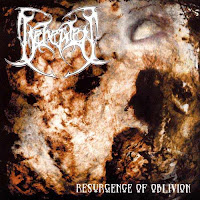 I'd be the last person to argue that Beheaded's 2000 EP Resurgence of Oblivion offered the listener some advancements in production quality over their debut Perpetual Mockery, but stylistically I felt like there was something more stylistically paint-by-numbers, or statistically average in the five tracks here which wasn't nearly so compelling or balanced as the earlier full-length. Almost as if I could just interchange this material with any number of other acts fielding similar excursions into brutality. Though it would be years before they actually signed to Unique Leader Records themselves, there was definitely a similar aesthetic underpinning this EP's songwriting to acts like Disgorge, Mortal Decay or Deeds of Flesh who would also end up there at some point.

Not that there's anything wrong with that, but certainly in the case of Resurgence of Oblivion we've got more of a hard on for punishment than personality, and it shows stiffly through the seams of the members' jeans. The note patterns have become more complex, but no less percussive than their earlier songs, but though they're induced with more clarity in the superior guitar tone, they feel no less muddled as any number of the less technical, less interesting progressions present on the debut. Certainly the numerical increase in lightning mutes and oppressive harmonies, or the more surgical picking sequences here could have lent themselves to a taut and impressive effort, but most of the songs on this EP blend together entirely, to the point that I find them very hard to discern from one another in the memory. Despite the ceaseless tirade of notes being thrust past my nose, none of them really smell like the reeking, festering corpse I desire from the best of death metal, and thus I'm left on the sidelines of the football match fan base to which this sort of material generally appeals. As always, I'm never one to search for a record to which my action is merely 'dude, that was so brutal', but poignant and soul scarring music I'll want to revisit 10 years hence.

Resurgence of Oblivion is nothing of the sort, but I suppose I should point out that at least the disc sounds better, with a more pinpoint accuracy to the guitars' distortion that complements both their more urgent sense of intensity and the muscular drumming, which is frankly still a fraction loud in there. The bass lines here are far better than on the debut, with a rumbling, popping, and colon rupturing presence that generates acrobatic contrast to the rhythm guitars. The leads are wilder and more frivolous than on the first album, just screaming off into the darkness of the rhythm section under the tenets of bands like Slayer or Pestilence. I will say that the newer vocalist on this, one Lawrence Joyce, seemed like a step down from his predecessor in terms of charisma. His guttural, staccato timbre plays out like a natural sibling to the kick drum through the disc, but at the same time it's a lot more monotonous in structure and never really interesting. Then again, this was what a lot of the most intense/brutal death bands at the dawn of the 21st century were gunning for, and I can hardly fault the overall banality of this material with his performance.

In the end, enjoyment of the EP comes down to a question of whether or not you're a fiend for this brand of face clubbing, unwavering brutality and business to the level that you're willing to forgive a lack of strong dynamics and interesting riff construction just to have more of it. Personally I had hoped the band would continue its more atmospheric paths off the debut, tighten the production and build themselves a Maltese masterwork of murder. Instead, this is something that failed to distinguish itself beyond a nod towards the band's obvious levels of ability. Not bad, perhaps, but had I not been determined to explore through their entire discography again, it would still sit stolidly in the oblivion it celebrates.