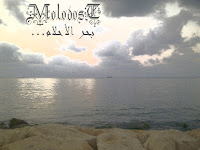 Molodost's second demo بحر الأحلام translates to 'The Sea of Dreams', and I think that's a pretty good handle for its calm and collected content, which lacks some of the obsessive madness of the Lebanese musician's prior Shades at Salvation Borders. While there are still a handful of black metal aesthetics present, the compositions here are largely rooted in simple, programmed drums and keyboard passages; maintaining a low budget feel, a very underdeveloped level of polish (which some with love and others loathe), and a sort of 'dungeon synth' vibe, only Raed's note selection and synthesized instrumentation is far brighter and friendlier than the formative works of, say, Mortiis or Burzum to fall under this category. Yes, this could definitely fall under the 'guy with a keyboard' or 'bedroom black metal' category, but it's not as if its creator has illusions about to the contrary, or to his own capabilities in terms of production and musicianship.

Much like its predecessor, The Sea of Dreams does feature a cover song, but in place of Burzum, Raed has gone for a far more obscure instrumental by the French band Mortifera; "Epilogue D'une Existence de Cryssthal" from their Vastaiia Tenebrd Mortifera LP (2004). Again, he's not offering all that much of a sonic translation of the original. This is a tinnier, airier, low-fi recapturing of the original's ambiance, and I have to say, even if I could give Modolost a few points for even paying tribute to such an obscurity, that it might be more interesting in the future if he took on some material that he could really transform into this base set of melodic components. As it stands, the atmosphere and emotional resonance of this incarnation does not feel quite so richly saddening as the original, but neither can I really rip into it, because unlike the new, titular original, "The Sea of Dreams" itself, this one is at least pretty consistent throughout. It's neither as compelling nor bizarre as the title track, but then again, any possible praise for "The Sea..." comes at the expense of its own flaws, which are numerous and somewhat of an obstacle to my overall enjoyment of the demo...

Book-ended by samples of a shoreline, "The Sea of Dreams" feels like a number of disparate ideas thrown into one track, which mirrors the disjointed aesthetics of the earlier demo, but with a more consonant and melodic undercurrent. You've got atonal sounding guitars clanging along as a lead, and some jangling, folk influenced tremolo jangles, with one or two straight surges of pristine, blazing melody that in fact were my favorite moments throughout the demo. Raed applies some garbled vocals (the Arabic lyrics of which I couldn't understand), but the contrast they create against the thinner tone of the music is unfortunately more of a corny embellishment than an effective one. The drums and lower atmospheric tones, as artificial as some will no feel towards them, didn't really bother me much. When a percussionist isn't available, you do what you have to; but neither are they mixed very well, and it only creates a similar amateurish vibe to the last demo. All told, I can't fault Molodost for its ideas, because in hearing this, despite all my complaints, I think this is a musician with some interesting ideas, who simply needs a better studio setup to really bring them all together. Stylistically, this isn't the most petty form of escapism, and the Romantic ideals and inspirations are often well matched to the desperation and agony of DIY black metal, but musically this felt too stripped and scattershot to capitalize on its available strengths.