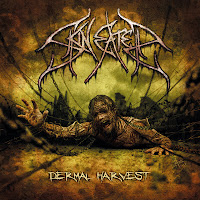 Skineater is a newish, Swedish collective whose constituents have a truckload of experience from a number of extreme metal acts, not the least of which include names like Wombbath, In Thy Dreams, Carnal Forge, and Defleshed. While these sorts of 'supergroups' pop up all over the place in a country so thick with signed metal musicians, here is one you might pay some special attention to, because the diversity of their prior acts plays a huge role in the dual-nature of their sound. No, good readers, Dermal Harvest is not another increasingly futile exercise in aping the old Sunlight Studios guitar tone and kneeling at the shrine of the country's old school heritage so much as it's a highly functional fusion of the melodic and brutal extremes of death metal, in equal measure.

In other words, its a harried and intricate mesh of extreme USDM influences like Morbid Angel, Deicide and Cannibal Corpse with 90s Swedes like At the Gates, Dark Tranquillity, and In Flames. While purists of the former grouping might not take kindly to Dermal Harvest's use of dual harmonies and driving melodic tremolo riffs that hearken back to titles like Slaughter of the Soul and The Jester Race, you have to give them some credit that they can balance them off so effortlessly against the harsher churning, clinical chugging that weighs down more of the prevalent grooves. Strangely enough, though, Skineater never really sounds like an 'old soul'. The clean, bludgeoning production seems sleek and modern, the drums played at almost a mechanical level of perfection, the bass oozing and thuggish and constantly adding a depth due to its swerving note progressions that never adhere too strictly to the rhythm guitar. But most importantly, the band is backed up its riffs, riffs, a thousand riffs. Not all of them are amazing, and few of them are unique, but you will simply never run cold on their flurried variation and intensity. Founder Håkan Stuvemark wasn't joking when he formed this project around a desire to reconnect with his primary instrument, there is a fuck ton going on through this album from the blitzkrieg death blasts of "Through the Empire" to the crawling 90s Morbid Angel grooves of "Made of Godsick"...

Tracks are kept quite focused and concise, only occasionally breaching the 4 minute barrier, and in this span of time they deliver a pretty substantial array of bludgeoning breakdowns, primal rhythm guitar patterns and elegant glazes of harmony that often encapsulate these excellent, surgical muted melody progressions that shine alongside the bulk of the beat. The vocals aren't all that distinct or impressive, pretty much the same as you'd hear in a number of other Swedish projects like Bloodbath or numerous  Rogga Johansson's bands, but they're integrated well into the mix, and offer a more ghoulish contrast to the intricacies of the riffing and the dreaminess of those dual melodies. Probably the biggest complaint I could make is that this is one of those albums which gets everything right except for its compositions' ability to stand out in the memory. In listening through Dermal Harvest, I found myself admiring the enthusiasm and ability Stuvemark and his friends bring to the table, but I didn't get a lot of replay value here. That said, Skineater gets extra points for binding these two extremes in death metal successfully, and this is one solid ass start. Sometimes the skin is the best tasting part, after all.