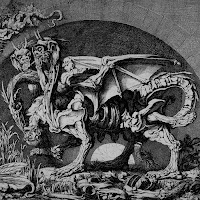 Every so often, a band will come along and give an established genre a firm kick in the ass by breaking it down into its constituent elements and producing a distinct work that hearkens back to a time of 'innocence' for that niche. I realize it's hard to use that word 'innocence' in conjunction with the black metal medium, pretty much the antithesis of that particular virtue. And yet, Sweden's Head of the Demon have done just that with their eponymous debut: clutched the despoiled orchid of modern black metal by its roots and clipped off any of the withered foliage above ground level, to produce a captivating and primal substrate of rich evil that just beckons to be experienced. Precious few other bands, outside of say Darkthrone, Vultyr, and Sarke, have manifest such a pure and hellish concoction as this, but this trio is only just getting started. Granted, several of the members are not newcomers, having done time in bands like the grave churning Kaamos or the melodeath obscurity A Mind Confused, but nothing quite so eerily resonant as this beast...

Head of the Demon is essentially a mesh of black and doom metal aesthetics, the former coming through the dire atmosphere and strained, hoarse vocals ala Tom G. Warrior or Nocturno Culto; and the latter through the generally slow-paced tempos that dominate the record, not to mention the waves of opaque psychedelia created through the guitars. Dress it all up with a vintage, fuzzed out yet choppy guitar tone, and the ominous presence of solemn, subtle backing choirs that hover out into the vaulted Underworld ceiling of the record's dominant mood, and you've got yourself an experience that can instantly dial you back 30 years and grant you a portent of what MIGHT have been, if more bands took a more steady, minimalistic path that honed in on unnerving, simple riff architecture rather than vile speed and vitriolic rasping. Ranging from 6-10 minutes each, there is no track among these that will not take it's time with the listener; but the vine-like crawl of the guitars is incredibly focused, and each bit of atmosphere, like a slowly riding piece of percussion, a cleaner and mournful vocal line, or a groovy bass-line strutting its own path is perfectly placed to maximum effect. Thus, Head of the Demon does so much with so very little that you cannot help but feel it's genius, one of those anomalous recordings that sacrifices the normal playbook to win the game.

Not every winding, grooving riff is incredibly catchy, mind you, but the lion's share are interesting enough that they never betray that pervasive, haunted atmosphere surrounding them. The drums have a great, live feel to them, and the bass is always audible. Organs and other effects are chilling and simplistic, but never frivolous or excessive to the point that they couldn't be reproduced live with a stunning clarity. Most importantly Head of the Demon earns its 'doom' stripes by actually compelling the listener to just such a feeling. After an hour or so spent with the Swedes' debut, I fell into a stretch of utter hopelessness. The sun wasn't ever coming up again, and I'd yearned a bottle of absinthe in which to drown my woes. "By Titan Hand" dragged me into this unlit, subterranean realm of consciousness, and the remainder of the record held me under with a firm grasp. I almost want to compare it to Ghost's Opus Anonymous or Jess and the Ancient Ones' debut:  not that the three have many aural aesthetics in common, but what the first did for the whole Mercyful Fate heavy doom thing, and the second for the acid-washed occult trippers, this group seeks to accomplish for a blacker medium. Consider this their first success, easily recommended to fans of acts as wide as Negative Plane, Mortuary Drape, Vultyr, Darkthrone, Furze or Black Sabbath. Or, really, to advocates of anything ancient, shadowy, and obscure that vanishes with the dawn.