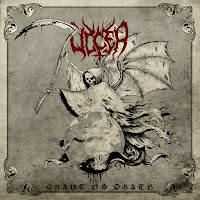 Though the style they play is hardly the most inventive of late, Ulcer threw me for something of a loop in that they're a Swedish style retro death metal act hailing from Poland. Though this is a country known very well for its death metal exports, some of the best in the world, in fact; not to my knowledge do any of the bands so closely prescribe to influences like Dismember, Nihilist, Unleashed, or Entombed, all represented here in what for all intensive purposes is a mashup of Clandestine, Indecent & Obscure, and Shadows of the Deep. I've heard similarly inspired bands hailing from Finland, Germany, Holland, the US, and of course Sweden itself, but this just might be a first of its type. It's not your usual balance of songwriting and technicality prevalent in something like Behemoth, Vader or Lost Soul. However, all of the usual hesitations do apply here: are they giving us anything new to the style? Are they writing riffs or grooves that resonate across the memory? Rivaling their influences in any capacity?

Unfortunately, the answer to all of these questions is a firm 'no', but not for any lack of trying. They manage to embolden the classic Sunlight Studio, overbearing guitar tone into a thick, putrid paste and then dump it over the listener while the vocalist howls rigid sorrows and suffering in the vein of an L-G Petrov or Matti Kärki; just enough reverb that they echo over the roiling mass beneath to good effect, and they intersperse some more brutal guttural inflections in there to mix it up. Actually, they've got normally got two vocalists, hailing from other Polish extremities Deivos and Oremus. Though the rhythm guitars are constantly coursing and crushing at the maximum volume, you can actually make out the band's considerable use of mournful, evil sounding melodies which is of course another characteristic which defined some of their overt influences. But largely they use a lot of muddy tremolo picked patterns or broken-up d-beat chord sequences. Drums are given a nice, crashing mix here, and a load of fills are used to busy up the more simplistic groove structures, but once again, I'm reminded quite a lot of how they were played on an album like Clandestine. Lastly, the bass didn't exactly impress me, because it tends to get lost under the huge tone of the rhythm guitar.

Ulcer does well enough to vary the tracks without losing consistency, between the gravesoil shifting faster pieces to the more plodding artillery of "When Horror Comes". The title Grant Us Undeath might have been a better choice for this, because many of the songs play out like necromantic calls to war, clarions of death magick emanated from your local cemetery. All told, though, while the compositional skill is solid, and the members have a communal wealth of experience from death metal bands of different stripes, the album just isn't able to overcome that hurdle of sounding like so many others I've heard over the past 5-10 years, and doing little more than serving as a loving reinforcement of its influences. The riffs, while grimy as fuck and produced to blow the roof off your coffin, just don't stick with me long after a song passes, and it's not so pervasively evil sounding as something like Miasmal, Tormented or Repugnant, all of which have a similar but more effective spin on the same aesthetic. That said, if you've really got the space in your rotting heart for another band in this vein, it's not as if Ulcer are going to disappoint you much. Grant Us Death was written to pay homage to vintage Swedeath, and they offer nothing less.