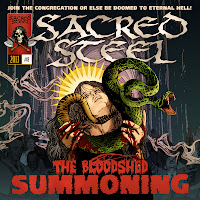 Crazy how that time thing flies! I can recall picking up Sacred Steel's 1997 debut Reborn in Steel, my first exposure to their brand of brash yet traditional German power/speed metal as if it were yesterday. And yet, here they are already releasing record number eight, adorned with a wonderfully pulp sword & sorcery comic book themed cover which is frankly a good match for the nostalgia they convey through their lyrical themes of black magic, fantasy warfare and other admittedly staple fare for the genre. However, it should be said that the real triumph of this latest opus is not that it's some long-belated masterwork, but probably the first album in the Germans' career upon which I could tolerate the vocalist, Gerrit P. Mutz, whose frivolous screaming proved a huge obstacle that I simply couldn't overcome...

I get what the guy was always going for, a high pitched, melodic squeal in the vein of greats like Rage, Mania, and Scanner from back in the 80s, but it simply never worked for me. Here on The Bloodshed Summoning, he maintains a lot of his charisma, but focuses it into a darker and more extreme metal performance with lots of growls and vicious lower-end bites, and the end result is an album far easier to stomach while at the same time more tangibly aggressive. After all, the guy's got a lot of experience in a few of his other, doom-oriented projects to bring some gravity and anger to his inflection, so why not bring it over to the mainstay? He doesn't exactly abandon his higher notes completely here, but even the pinched, nasal melodies exhibit a large degree of control. Ultimately, the man is an asset on this record, rather than a liability, which is very much needed, since the riff set and songwriting here isn't among the best in their body of work, but rather a stopgap between bands like Judas Priest, Primal Fear and Twisted Tower Dire. Ironic, in a way, because their last full-length, 2009's Carnage Victory was one I had an opposite reaction towards: insanely good music, but the vocals soiled my experience.

That quip aside, The Bloodshed Summoning is still a reasonably exciting experience if just to hear this long desired merger of savage, classic riffing progressions and Mutz' dirty ass howls and snarls. This is far from a flaky, overproduced flower metal album saturated with keys and anal retentive Stratovarius songwriting. The guitars have some depth and murkiness to the muscular rhythm tone, and the harder hitting, chugged rhythm guitars occasionally hinge on more of a thrash/speed structure. The lack of fairy-like screaming and the brute force of the riffing sequences definitely recalls the angrier Germans like Grave Digger, Paragon, or the heavier side of Iron Savior, U.D.O. and Running Wild more than tripe like Freedom Call and Sonata Arctica, with a healthy serving of 80s US cult classics like Liege Lord's Master Control and a bit of bitter doom. The leads do often feel as if they've been shoveled below the crunching largesse of the rhythm riffs, but ultimately there's enough melody carried over through the implementation of cleaner axe tones (as in "No God/No Religion"), and the bass guitar and drums are like a goddamn phalanx marching off to war, so steady and abusive that they really add some force to a track like "Under the Banner of Blasphemy".

So the added cover of "Dig Up Her Bones" isn't well enough rendered that I'd consider it a selling point, simply because the vocals don't have much character there, but other than that you've got a solid effort for these veterans, and without any doubt this darker Mutz is a marked improvement that I hope will persist through their future output. There's enough variation between dirty power metal stormers and slower, more atmospheric numbers to support the swollen track list (15, including the cover and two brief instrumentals), and it's honestly one of the better Sacred Steel works I've heard to date.