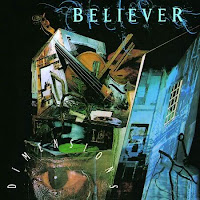 Though their first two records revealed obvious hints of experimentation, it wasn't until Dimensions that Believer would fully embrace their inner nature as progressive metal pundits with what is undoubtedly their most interesting, if not highest quality effort. Making better use of anything from samples to acoustic guitars, operatic vocals to deranged sound effects, and perhaps most centrally, a truly varied palette of thrash riffing dynamics that draws heavily upon jazz/fusion and classical sources. Like a number of other acts in the thrash and death metal fields (Pestilence, Cynic, Atheist, etc), it was evident that the Pennsylvanians were not merely content to repeat themselves, and desired a metamorphosis of their chosen medium into a vaster aural tableau. That they do this without sacrificing the thrashers within them, is to their great credit, even if Dimensions does lack some of the punch and power of its predecessor Sanity Obscure.

You wouldn't know the band had changed itself all that much judging by the first half of this disc alone, which is a natural extension of the first two, laden with thrash riffs that culminate in some scorchers like "Singularity" or the clinical "No Apology", but by that point the band have already slipped us a bunch of those random, neurotic effects that always seem to cast us back into the madhouse whenever we've settled into some pure, palm-muted, frenzied goodness. There are some uncanny sounds on this thing, like that quivering, unnerving ambient intro to "What Is But Cannot Be" or the introspective narration above the acoustics in "Dimentia". Bachman's vocals themselves are just as suffused with anxiety as they were on Sanity Obscure, with the caveat that they feel cleaner, as if recorded in a more sterile environment. The same could be said for the guitars, which is why they feel a fraction more piecemeal and far less forceful than the prior albums. Granted this is music that requires some degree of polish, professionalism and refinement, that the listener is able to pick out the nuances and the vast swaths of notation delivered through the guitars, but I admit that I've long felt this was a bit too surgically sterile in terms of its weight.

That aside, one distinct area of improvement is that the thinner guitars permit the bass to step out and slink along independently of their crushing weight, which was an issue on Extraction from Mortality and to a lesser extent Sanity Obscure. The level of variation in the writing lends itself to a more natural dichotomy in the percussion, which might share the lack of hard hitting resonance of the guitars, but grants a lot more space to mess around with fills, rides, hi-hats, etc. But probably the brightest selling point for this record, at the time, was the "Trilogy of Knowledge" suite which occupies Dimension's latter half. Collaborator Scott Baird and his sister Julianne once again contributed their classically honed talents to create an honest to God symphonic proponent that meshed quite well with Believer's thrashing matrix, and while it's not in of itself highly memorable, there was a certain novelty to the effort which had to be appreciated. Today, symphonic metal (or at least use of certain components) is quite commonplace, but the early through mid 90s was an age of brutes and the emergence of shit-tastic groove metal, so Dimensions was quite a gem in the rough, especially the contrast of Julianne and Kurt's voices.

Lyrically, the album still deals heavily with the topic of the band's faith, but also more heavily serves as a psychological profile on sanity, a discussion of man's place in the universe. It's not quite so in your face as a lot of similar minded Christian thrash acts, like the hilarious Vengeance Rising. At worst you get a bit of theistic defensiveness in "No Apology", or the "Trilogy of Knowledge" tracks which in parts feel like a sermon. As with the first two records, I've never really felt this was a major obstacle towards my enjoyment of the music as a whole (but I can say the same for most Odinist, Muslim, Satanic, Judaic, Mythos, Hindu, Buddhist and Christian metal I encounter, your own mileage may vary). Unfortunately, despite its polish and progression, Dimensions came a bit late in the Golden Age cycle of thrash to make much of a splash, and its inquisitive and experimental nature ran in direct opposition to the 'dumbing down' of the nu-metal, groove metal and metalcore onslaughts that were nearly underway. Makes sense that this would be the 'writing on the wall' for Believer, at least until their 21st century rebirth. I've never much been in love with this record, preferring the more belligerent psychosis of Sanity Obscure, but it's nonetheless interesting, and fans of records like Focus, Spheres, Deception Ignored, Elements, and 90s Mekong Delta should give it a whirl.