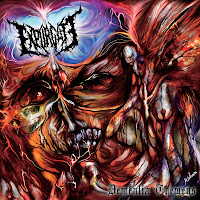 The 'Mile-High City' might be the last place one might expect to find such a gurgling, lowdown pile of intestines as Expurgate's full-length debut Dementia Tremens, and yet here they are, taking a dump all over the snowy peaks and flats of their territory with an album of misogynistic, meat headed slam breakdowns and flights of faster, old school brutality. Let's get one fact out of the way first: there is not a single individualistic or unique characteristic to this album which the avid death metal listener won't have heard hundreds of times over the past decade. Between the thuggish palm muted moshing components and eruptions of tremolo picked guitars, everything does seem as if its been paraphrased from the band's influences, from Suffocation to Lividity to Devourment, but despite this shortcoming the Coloradans have put together a taut and compact 23 debut which purists for this form won't find much to scoff at, even if it isn't exactly pushing the envelope off the nearest cliff.

These are not songs concerned with leaving a lasting impact on your memory so much as an immediate impact on your chin, tummy, scrotum, or wherever you like to take your blows. The guitars follow a very percussive pattern which essentially doubles up the drums for a one two bludgeoning combination, and the low end tendency of the notation will churn your stomach even after a spoonful of Pepto Bismol. There is nothing exceptional dirty or raw about the production, this is by the numbers, modern sounding stuff with a lot of punch to it, but clear enough so when the group breaks out its accelerated picking sequences you can make out every note. Pinched squeals all over the place, par for the course. In particular I rather enjoyed the bass tone, which is pluggy and potent enough to lend some added 'bounce' to some of the neanderthal rhythms, but overall the instruments are all mixed straight on the level and I never felt as if anything was drowning anything else in a swamp of entrails. Which is good and bad, since there's no real atmosphere of note other than the driving, pummeling mechanics of the members' limbs, but pretty standard for this niche. The vocals are club-like, blunt gutturals with an effective, toilet-flush sustain on them that will not surprise anyone, but function well enough within this particular fleshy plumbing.

Some of the lyrical placement over the chugging is hilarious here, in particular through "Repugnant Torso Defilement" and "40 oz. Facefuck". Songs that you would NOT want to share with your grandmother or girlfriend (okay, maybe if you've got a particularly masochistic counterpart); but I broke out laughing and I'm sure it was not unintentional on the band's part. I also laud that Expurgate vary up the content enough through the rather short album that it never grows dull or exhausting; I've encountered a number of these slam-oriented bands who focus all too much on the one set of slower, chugging gaits, and the Coloradans at least seem open to incorporating some of their more intense and busied influences to provide a decent range of tempos that really let you 'feel out' the breakdowns. Ultimately, it's a solid debut that will sate many fans who comb the rosters of labels like Sevared, Amputated Vein and Comatose (the last of which is releasing this), and worth a listen if you enjoy decently structured and produced death of this variety ala Kraanium, Ingested or Abominable Putridity. On the other hand, I didn't find the riff progressions timeless, distinctive or catchy enough that I'd revisit it very often.