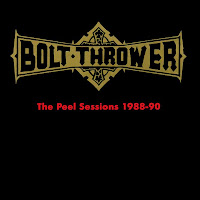 Though I consider myself fortunate enough to have had local college radio available to me through puberty (WJUL Lowell in particular), and plenty of exposure to the metal and hardcore/punk underground in the mid through late 80s, introducing me to hundreds of bands, there wasn't quite anyone like England's John Peel that I could tune into, at least not to my knowledge. Most of us American fans probably know the name through the 'Peel Sessions' sets he would allot to up and coming artists in various genres, many of which were released as EPs that the rest of us outside the UK would hungrily track down. While Bolt Thrower was still pretty small time when it first appeared on Peel's show in '88, I can just imagine how cool it would have been for these guys (and gal) to show up at my studio and churn out some fucking war metal...really, one of those 'best job in the world' situations that you simply have to envy.

Bolt Thrower had three Peel sessions, each more or less corresponding to promotion for one of their first three albums, and the first transmission was released as an EP through the Strange Fruit imprint in 1988. Undoubtedly a collector's item, the better option was the 1991 re-issue which also featured the later sessions (another in '88, and then the War Master preview in '91). So, basically a 12-track tour of Bolt Thrower's formative, influential material captured for posterity, and for what it's worth, I think it sounds pretty good, better than many of the professional live albums I've heard from extreme metal outfits. The songs in each session don't necessarily correspond with the albums in chronological order, so listening to the material in sequence definitely feels as if you were capturing a gig back in the early 90s. There are a few issues, like the drums feeling extremely loud over various of the sessions, the kicks creating a rumbling tectonic plate that often feels disparate from the rest of the instrument mix, but what I enjoy about the entire experience is how it really captures that grim and oppressive atmosphere of the first two records, even on the later tunes like "War Master".

The grooves sound incredibly evil, Willetts' guttural timbre is smoky and ominous like a massive gunbarrel post-payload, the bass trembling and the guitar tone just about perfect, and though the production of the various albums did differ, the collected sets here all sound quite consistent. You really feel as if you're ducking behind cover in some massive urban warzone, buildings collapsing and tanks crushing the debris while survivors hide in any nook and cranny that will shelter them. There's also a track here from the 2nd, Realm of Chaos Peel session: "Domination", which is exclusive, though bits of it were cannibalized for other material later. Not their best by any means, and gets a little monotonous through the blasted stretch in the center, but an added bonus nonetheless. Otherwise, the track choices are just awesome: "Attack in the Aftermath", "Drowned in Torment", "Eternal War", "Lost Souls Domain", "Imperial Erection"...oh wait, no, the last one was just my reaction as a Warhammer fiction enthusiast.

In other words: a quintessential Bolt Thrower live offering that satisfies just about any desire I'd ever have to purchase such a medium. It's no wonder they haven't strung us along with a bunch of useless live recordings, they've certainly got the popularity, but apparently they've also got too much class, and had already given us the first tasting before releasing a full-length. The only alternative I can think of would be their Earache 'Into the Pit' .mp3 session Live War, but the track I heard off that did not impress me as this did. Unfortunately, I can't imagine this is easy to find anymore. If you were lucky to be collecting tapes or CDs back in the 90s, it wasn't all too difficult (I saw numerous copies at my local import shops), but these days it is probably due for a reissue. Maybe even an iTunes reissue?! Someone get on that.