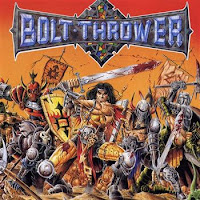 I've mentioned before how 1991 was a particular year of letdowns, or albums that I've never interpreted as having the level of brilliance that many acclaim. Bolt Thrower's War Master is another example of why this curious curse applied strongly to the death metal realm. Often lauded as one of their best releases, I understand this is an album which holds a high place in many hearts for a number of reasons. It came at a time when Bolt Thrower was finally achieving some popularity overseas, and for a good many of the band's long term fans it was actually the first ever exposure. In fact, death metal as a whole was really beginning to take off, and thus it seems a predictable coincidence that several albums of this time are hailed among the utmost classics of the field: Sepultura's Arise, Morbid Angel's Blessed Are the Sick, Death's Human, all efforts that I found inferior to their predecessors in terms of songwriting quality, but nonetheless have achieved an inarguable immortality. Now, that's not to say I hated any of them, and War Master itself isn't such a bad record, but after the unforeseen crushing I received at the hands of the Bolt Thrower sophomore effort, I felt like the band abandon a lot of that grim, grinding, oppressive atmosphere to create a work more accessible to a broader array of extreme metal aficionados...

Which wouldn't be a bad thing, necessarily, if the composition had the same caliber of hooks, or if the band showed a marked progression in how they structured their music. War Master doesn't quite accomplish either of these things, and for the most part it feels like a Realm of Chaos Part II, only waxed and polished to a shining surface. In my case, completely unneeded. The songs are still rooted in similar grooves to its direct predecessor, and Bolt Thrower hadn't exactly reverted to the faster, more disjointed songwriting of their debut, but I found that at least half the cuts here just didn't stick like a "Drowned in Torment", "Lost Souls Domain" or "World Eater". Aesthetically, I suppose that, at the time, I might also have felt displeased band was starting to lyrically edge away from their Warhammer 40k theme, though some of the lyrics are a direct continuation of the same, pessimistic overtones. But considering that their debut was a more general examination of warfare and nuclear eradication, and the cover art was intended to capture a Warhammer Fantasy feel, the inner nerd-child in me couldn't really cite this as a reason to throw it out to the proverbial Space Wolves. No, my lukewarm reaction to War Master ultimately rests on the fault of several of its songs to penetrate my memory for more than a small stretch of time, and the fact that it's sandwiched by two far better albums, which in unison are responsible for most of my favorite Bolt Thrower tunes.

There are exceptions, of course, like "What Dwells Within" with its hypnotic tremolo picking, "Cenotaph" and "Profane Creation" for those monolithic, melodic grooves, but in general I can pass on most of the tunes here without feeling as if I've missed out on anything. In terms of production, it's quite spiffy. The guitars have a crisper bottom end that still manages to give an impressive of depth and forceful heaviness, but there was this flesh wound fiber to the tone on the last album that isn't matched here. Drums seem to have been tightened up in terms of timekeeping, yet the cymbals, snare and hi hats often feel a tinge too tinny. I know I've read that Jo Bench didn't enjoy the bass tuning on Realm of Chaos, so it makes sense that she's a little more audible on this followup; but at the same time, even if the bass lines are louder, they're not doing much of interest here aside from following along with the rhythm guitar. Willetts' inflection had hardly changed at all, but I still felt like his performance on the sophomore was more bloody, brutal and atmospheric. I do like the leads here, they're vivacious, bright, and cautiously ripping in contrast to the meatier rhythms, but many of the riffs in the verses feel a fraction banal. Natural for the Bolt Thrower canon, but rarely interesting enough that I want to force myself through them repeatedly.

For 1991, the band still provided a pretty fresh alternative to not only their British peers, but also the Dutch, US and Swedish scene. Unfortunately, that tangibly eminent, otherworldly, depressing grandeur of Realm of Chaos had been dialed back, and War Master feels somewhat more dry as a result. It's got some decent riffs, and the handful of songs that I'd qualify for a 'best of 'list, but for myself it stands alongside Honour Valor Pride and Mercenary as one of the Brits' albums I'm least likely to seek out for my fix. The campy, bloody artwork is admittedly iconic, and it made sense that they'd capitalize on the rougher productions of the first two records with something seemingly larger in budget, but in the end the sophomore has aged so much better in its ominous totality, and The IVth Crusade was far juicier and instantly appealing. For me, at least, War Master remains 'the album between'. A placeholder. I get more bang out of this than various other 'bigger named' death bombs that year (including those listed above), but it rarely reduced me to the same pile of slag as its neighbors in their discography.