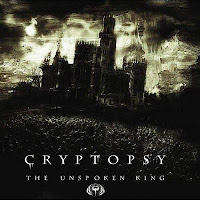 It doesn't at all surprise me that The Unspoken King has received the tidal wave of negative reactions that it has; what DOES throw me for a loop is how a lot of these people act as if it's their first shitty album. Not the case, if we glimpse back to the turn of the century, and also not the case that the band hadn't been struggling to define a direction for itself for the decade prior to this album's release. So, this is the infamous 'deathcore' record, yet Cryptopsy had been incorporating ingredients of that aesthetic bastardization as far back as the later 90s. Not news, even if The Unspoken King streamlined the techniques in terms of structure and studio engineering to position itself better in the theater of warfare with up and comers like Job for a Cowboy or Whitechapel.

This, in of itself, this stylistic choice, does not bother me. The trending and timing is suspect, but a cursory listen through the previous material will reveal influences of metalcore, math metal, sludge, and just about any other 'hot topic' on the extreme music scene of the Western world. And let's be honest: a sizable portion of the band's audience consisted of hardcore and metalcore fans since the 90s, when they first got wind of a record like None So Vile or Whisper Supremacy (around the time of the Century Media signing) and got off on the raving guttural vocals and the technical lunacy of the performance. While purely anecdotal evidence, I, myself, living in one of the USA's most massive and trendsetting metalcore markets, heard a lot more about Cryptopsy from the 'core kids than the bedraggled death metal minority. So it makes a lot of sense that the band's audience would itself rub off on the band, as it always had, and create a feedback loop through the years. The problem is that prior works like Once Was Not took this into an experimental direction, where The Unspoken King is a brickwalled billboard for its cliches, a Bleeding Through with a higher level of technicality and musical endorsement, and less novice chord progressions and glaringly generic melodies.

The Unspoken King isn't a bad record because it forges a truce between Cryptopsy's spurious, furious history and deathcore's tattooed, stretch-lobed, emo-haired breakdowns. It's a bad record because the songwriting is uniformly soulless and uninteresting. To be certain, this is not an effort short on variation; I'd go so far to say that there's just as much diversity on this as Once Was Not, only playing by a separate set of rules. You've got your mechanical drumming-fueled brutal death metal undertone, climaxing into some of the most banal and boring chug breakdowns you've ever heard. Glints of post-hardcore and modern heavy radio rock are strewn through the more intense passages, and they definitely make every effort to showcase the 'sensitive side' of their new vocalist. If all of this were dowsed in superb riff-writing, atmosphere and really catchy vocal lines, then I'd be the first to forgive these cheap shots of accessibility, but unfortunately these ideas simply don't gel into anything worth remembering. In their attempt to escape the 'weirdness' of the previous, Lord Worm fronted album, they've gone too far to the other side, losing all distinction.

It doesn't help that two of the newer band members, whether by their own lack of talent or poor decisions on the part of the veterans, turn in such atrocious performances here. Vocalist Matt McGachy was pretty much a 'package deal' of mediocrity. He's not necessarily tuneless or incompetent at the contrasting styles and pitches he brings to the table, but each feels wholly mundane and uninteresting. Not as goofy as Mike DiSalvo on And Then You'll Beg, but no more charming either. He's got a pretty standard guttural bark, a deeper guttural for 'da sickness', a rasp that's more suited to the grind influenced grooves and rhythms, and the requisite clean parts for those 'radio hooks' redolent of NWOAHM bands like Shadows Fall, Killswitch Engage, and All That Remains. Safe for mommy, or your little sister. While none of his harsher inflections is particularly effective, the melodic vocals are almost unbearable in the context of Cryptopsy; ranging from a Puddle of Mudd/Linkin Park inflection to a silkier attempt at pulling off some Mike Patton worship, which simply sounds out of place on this record. Probably the worst offender here is the song "Bound Dead", which transforms into vapid power chord strumming that carries his voice into very obvious 'we wanna be liked by people who would otherwise hate us' territory; but this is not the sole transgressor.

Even worse, the 'keyboardist' Maggie Durand. I'm not averse to Cryptopsy using synthesizers, as they made for an interesting orchestral excursion on the prior album, and I have no problem with synthesizers in general if they're adding atmosphere to the music. But these are utter shit throughout the whole record! It's very difficult to think of her as anything more than 'window dressing', as in the aforementioned shit act Bleeding Through. There's nothing wrong with a little eye candy, but for whatever reason she either really sucks at playing the keys, or the band is painfully underusing her here. At best she'll be delivering well below the volume of the other instruments, some single note atmospheric pad or sampled texture. Or the band will throw in a bit of a techno electronic substrate into a brief passage, but all of it is incredibly useless. The music would have lost nothing without it. If keys were not going to be made a prominent feature of the band, then I see no reason to even add a band member, and thus the pretty glaring evidence of 'sex appeal'. They can be used subtly to great effect (Soilwork's Natural Born Chaos), but here they are nearly 100% arbitrary. For all I know, Durand is a virtuoso on the piano, but Cryptopsy doesn't want me to find out...

Otherwise, who cares? Flo Mounier drums with the personality of one of those programmable vacuum robots that are all the rage with lazy housewives and househusbands. Sleek, professional, polished to a flaw. Yeah, maybe he sounds more level than on other records where his fills and performance had a lot more charisma, but this is no more or less than any modern brutal/tech record you'll find out there. I'm sure the bass playing is also keeping busy here, but it too feels like it's on a valium drip. Langlois' farting, popping presence on past records is here just another forgettable undertow to the machine-like composition. At the very best, Alex Auburn and Christian Donaldson will tear into some semi-decent death/thrash break for all too brief a time, or dial into the old school death metal that once inspired Cryptopsy in the 90s. For instance, my favorite moment on the entire record is the tremolo picked, evil sequence coming after the breakdown in "The Headsman" at around 3:20, where the airiness of the thin keys actually works, and the passionate lead capitalizes on the rhythm guitar, but they even go and fuck that up with the ensuing, boring nu-metal groove chords that make me wanna sprout dreadlocks and appear a Crow sequel soundtrack.

Pretty much the only aspects of The Unspoken King which don't disappoint are: a) the cover artwork by Jeik Dion, which is quite atmospheric and by that token has nothing whatsoever to do with the music; and b) the lead guitars, in general well composed and gleaming far above and beyond the vocals or rhythm sections. The lyrics are a mixed bag. Nowhere near as unhinged or compelling as the Lord Worm records, some are at least intelligent and meaningful (vague, personal or sociopolitical, and very 'deathcore'). But others are pretty shitty reads here, like "The Plagued", or "Bound Dead" which is so generic and emo that I had to slap myself a few times to realize I wasn't listening to Mutiny Within or All That Remains. Beyond that, The Unspoken King seems like quite a lot of effort expended into a product that I can't imagine anyone wanting. Did deathcore/metalcore fashionistas really want a brutal band of older Canadians jumping the bandwagon? I feel for certain that most death metal purists had no interest. There are a few moments in which the album reveals what it 'might have been' had the members' had their heads on straight, but really it's just a waste of everyone's time. Yours, mine, and the poor record store employees that had to expend an iota of effort unpacking and shelving the CD.