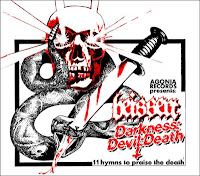 I've got a vague recollection of this German band's 2010 sophomore album The Pusher (probably received the promo with a pile of others and never ended up reviewing it). But by and large, Beissert is new to me, and fairly surprising; not always in a good way, but I can say with confidence that I've never heard a band quite like this, in part due to the wild charisma of their vocalist, Richard Beissert, who proudly stamps his feet onto the center stage of the recording. Don't get me wrong: he's not louder or harder pushing than the instruments, per se, but he's easily the most distinct factor here. Without him, Darkness: Devil: Death might just come off as a rather vapid modern groove/thrash disc with a few decent licks, but nothing too enduring or endearing.

The album is pretty interesting in that it's a horror tribute, in particular places towards H.P. Lovecraft, whose prose is often quoted directly in the lyrics. Not unusual in metal, perhaps, but for a band of this style, I guess it must be a first. Huge, ruddy, semi-sludgy chugging guitars (which often sound like the gunning of a broken muffler) are configured into contemporary thrash progressions with a few hints of 90s groove/metal or metalcore, and the drums have a bright, battering mix which ranges from the usual rock-inspired beats to a meticulous use of strong double bass patterns. The bass guitar is thick and deep in the mix, but often the notes will swerve off on their own course of fills, and it adds dimension to the substrate of the rhythm section. Beissert, though, is ultimately about the choruses. Those dense, down tuned and palm muted piledriver patterns are almost always a setup for some larger, melodic chorus as in "Zorn Der Geister" or "Age Ov Darkness", where Richard's performance will either sink or swim the album, and I found that in several cases, these proved emotional and climactic enough that there was a bit of replay value.

In general, I wasn't too fond of the rhythm guitar sequences, most of fall seem inspired by bands like Crowbar, Pantera or Machine Head, but a few quirky exceptions shine through (like that minimalistic muted hook in the verse of the title track). Thankfully the group indulges in all manner of atmospheric leads and melodies that help to glaze the meatier undercarriage. Variation is in no small supply here, I assure you. Really, though, as bold and bludgeoning as the band seems, it's the nigh on schizophrenic inflection of Beissert himself that proves the most captivating. Perhaps not as crazy as a Mike Patton or a Neil Fallon, but very much an original. His natural tone has a hoarse, manly and mildly constipated depth which is helped out by his accent (he sings in German on the track "DXXXV", but usually in English). And yet, he's also capable of breaking into a higher pitch, even a rare scream, and enjoys fucking around with his range. For example, in "Perm Trias", the longest and strangest song on the album, in which the bridge chorus feels like a Teutonic, darker sounding David Lee Roth joined by handclaps and girly backing choir...

Those are the sorts of surprises scattered through the 47 minutes of Darkness: Devil: Death, and part of the reason I found it easier to tolerate than other records which go for a straight 90s nu-groove aesthetic. Granted, the contrast of such goofy personality with the darker, brooding lyrical concepts is often a bit too much to swallow, but it's not something I hear every day, and made for a pleasant and interesting listen. In the end, I didn't find the music entirely compelling. The majority of the riffs did little for me apart from their rich and fulsome production, and I often had to focus in on the vocals just to maintain attention. That said, this is surely an unusual combination of dynamics. Like a bunch of Cthulhu cultists riding Harley Davidsons, heavily inked, with Ed Hardy tees, en route to a simultaneous pig roast/Nyarlathotep summoning. If the notion of sharing a few pilsner glasses with such folk jerks your chain (and really, who wouldn't?), and you don't shy away from simpler groove riffs like these, then at least give this a once over.