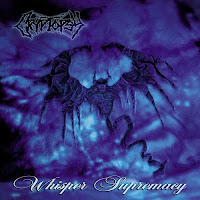 It's happened before and it will happen again. A beloved underground metal vocalist, for whatever reason, be it career-oriented or personality based (in this case signs point to the former), departs from his band, to be replaced with 'the new guy'. Commence the bleating of ornery twats among the fan base, the drama, and the automatic back turning and blacklisting of the act from a vocal yet insignificant minority of its audience. It's difficult enough to understand such reactions when a band is far larger in scope, like Black Sabbath or Iron Maiden, but for fucking Cryptopsy? True story, and a sad one. I just didn't jive with the responses of shock and dismay that numerous of my acquaintances had when it was revealed that Lord Worm was to be replaced by Bostonian Mike DiSalvo, whose prior experience was in fronting a (very local to me) demo-level death troop known as Infestation. Hey, congratulations, what an opportunity, to go off and front an up and coming band like this, for their Century Media debut Whisper Supremacy...the savage stars have aligned in your favor.

Don't get me wrong, I loved Lord Worm's lyrics, and thus was quite concerned that the quality might suffer with his departure (he still contributes to the tracks "White Worms" and "Cold Hate, Warm Blood"), but in terms of vocals I was never as sold on his style as many of my peers. He was whacky, wild, and amusingly sick on stage, but it's not like the first few albums would have been necessarily awful with someone else grunting and ranting over the music, and as I'd mentioned in an earlier review, he didn't have that same gruesome and unforgettable presence for me as many of the first generational death metal front men. DiSalvo was marginally different, but not to the point that he'd be incapable of covering those earlier None So Vile tracks. He's got a bit more of a 'street' aesthetic to his gutturals; nihilistic, hardcore and concrete, but still capable of diversifying his pitch with some ghastlier rasps, and owning up to the chaotic brickwork that Cryptopsy had evolved into musically. DiSalvo is not himself particularly memorable, and I do feel as if he failed to stand out among the hordes of guttural grunters in the field by the later 90s, but really that's the worst I could say about his performance on Whisper Supremacy. It's an album with some clear flaws, but he was not one of them.

No, alongside this transition in vocalists and label visibility, and the addition of another 2nd guitarist in studio (Miguel Roy, who had already been with them for a few years), the Canadians also began to develop their style into a broader palette of extreme metal aesthetics. Already renowned for their intensity and instrumental prowess, they began to fuck more with tempos. A lot of the denser, churning chord progressions placed through Whisper Supremacy brings to mind a solid foundation of battering ram grind. The contrasts between melodies and sheer, brutal annihilation create an increased sense of technicality. There are actually a number of riffs on this thing which mirror the most intense of the Swedish melodeath forebears (At the Gates, Dark Tranquillity, etc) like the rhythm guitars under the lead bridge in "Cold Hate, Warm Blood" or the tremolo picking pattern that sets up "Faceless Unknown". Cryptopsy were not new to the concept of breakdowns, but a few here have that generic chugging pit vibe that would go on to fuel the careers of countless future deathcore acts. Add these elements into the band's pre-existing pedigree of carnal blast beats, gut wrenching old school tremolo sequences, harried bass lines and over the top aggression and you've got quite a lot happening through the 31 minutes of the album...perhaps too much.

Some of Flo's beats here were reminiscent of cadences, and clearly the guy was continuing to expand and define is own capabilities with a barrage that must have had most drummers in waiting quite afraid for their own prospects. I noticed that the guitars had been cranked up a notch in the mix even beyond where they were on None So Vile, a double edged sword. They somewhat smother the bass lines, though not enough that you can't make out Langlois' racing across his fretboard; but at the same time, they're way more up in your face, for better or worse. When the riffs are great, as on the first track "Emaciate", it's an appreciable change. But a lot of the grindier, beefier progressions deeper into the disc are simply not all that impressive. Leads in tunes like "Faceless Unknown" are quite excellent, just as good as any on the sophomore, but I definitely feel like there are a lot of rhythm guitars which miss the mark entirely, thriving on their extremity alone. Lacking menace and atmosphere. Nothing special to write home about. Not that I'd send Cryptopsy based correspondence to my family, for they'd be liable to have me locked away somewhere.

And these guitars are a symptom of why Whisper Supremacy ultimately failed to impress me on the same level as its predecessor: there are too many ideas cramped into its concise bulk, and very few of them earn their keep. Beyond the obvious 'look at me, and how intense I play' nature of this end of the death metal genre, it's quite telling that the more concerted, melodic touches through the album feel like glimmers of hope among a very spiritless host of thundering drums and disinterested guitars. I never caught the sense of evil or foreboding that the band's wyvern-like mascot implied on the album cover, and several of the cuts, like the closer "Serpent's Coil" are a stupendous, dissonant, bore regardless of how rampant and hard hitting they seem. I dug the flow of the first two tracks, "Emaciate" and "Cold Hate, Warm Blood", in particular how the first cedes to the unexpected acoustic guitars threaded through the second. "White Worms" and "Faceless Unknown" certainly have their moments, but others like "Loathe" and "Flame to the Surface" had little to offer beyond a bludgeoning calamity.

Back to the lyrics: they're still pretty good, but they lack that psychotic, poetic stalker aesthetic which I so admired on None So Vile and Blasphemy Made Flesh. Plenty of imagery, intelligence and introspection here, but at the same time they seem somewhat more methodic and formulaic. The cover artwork is also not on par with its predecessors, though I'd take this any day over the shitty image on the 4th album. Things were pretty busy for Cryptopsy by this point, and though it was a few years past None So Vile, I always had the impression that this was a bit rushed, which might explain some of the cluttered writing. Transitions often feel forced into one another, and generally the dizzying bedlam of the performances outpaces their actual, musical resonance in the mind. A lot of the album's problems are emblematic of what plagues a lot of brutal/technical death work: a real lack of direction and compositional quality. Were I some robotic shell of a person, I might admire its drumming and brutish density more, contrary to popular belief, I still retain a pulse. A decent album, with a handful of really interesting songs, but ultimately less effective than its predecessor, and it doesn't age very well.