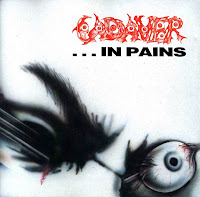 Hallucinating Anxiety had technically already been released through Earache Records, or rather Necrosis, a short-lived sub-imprint run by Carcass members; but for its followup ...In Pains, the Norwegian band was shifted over to the primary label. This increase in visibility, and also availability, coincided with a more professional, tightened direction for the group musically, and thus it's no shock that the sophomore was the disc to land them onto the radars of the underground death metal audience, who had begun expanding their collections as the genre truly took off with a number of important releases in the early 90s. Quite like the previous album, ...In Pains was hardly pursuing the most unique of identities, but where Hallucinating Anxiety fused a smattering of influences into a grisly, primitive and entertaining melting pot, its followup was more or less standing in the shadow of the Floridian band Death, who had at this point released their highly popular Human.

...In Pains is no direct bite off that record, but it's similar in structure. I'd characterize it as a more simplistic alternative to Human or Spiritual Healing, with a lot less guitar finesse, melody and lead-work, and a few mildly inventive embellishments in instrumentation: flutes, double bass, etc. Other comparisons I could make would be to Dutch bands like Pestilence (Testimony of the Ancients) or Creepmine (Shadows). The 'progressive' influence isn't quite so overt or spastic as a Cynic or Atheist, but it's largely felt through the swerving bass performance or the slightly jammy, dissonant nature inherent to several of the bridge sections. By and large, though, it's pretty much pure death metal, alternating between palm muted chugging and the expected tremolo picked patterns. Both were present on the debut, but to be blunt: ...In Pains is different enough due to its increased production standards that the two discs might as well be from separate bands. The UK influences like Bolt Thrower, Napalm Death and Carcass have been all but erased; you might hear a few similarities to Necroticism, perhaps, but that cruddy feeling, that grime, and that grind have been sacrificed in favor of a tighter, controlled, bass-heavy mix which was far more accessible to the death metal initiate, or the more musically demanding following who were already installed.

Gone are the repulsive, distorted bass-lines, and replaced with a more pulsing, pumping fusion, jazz or funk  influenced tone that competes with the drums and rhythm guitar for volume. Ole's vocals aren't much different than before, but the syllabic structures feel a bit more blunt and slack. His drumming, on the other hand, is better balanced and engineered, with more prevalent bass than the debut. Some of the power and charm has been leached out of them, and the construction of the riffs doesn't lend itself to much intensity, since there is a taut but lazy playfulness to the album which is like a recreation room at a mental hospital. The rhythm guitar tone is rich and propulsive, lending a thicker viscosity to the power chords, and the airier melodies and brief leads help flesh out the music (something that was admittedly absent on the debut). There are points through ...In Pains (like "Blurred Visions" or "Ins-through-mental") where the composition becomes very chunky and reflexive, the guitars and rhythm in a dextrous, acrobatic union both reflexive and interesting, and quite modern for their day, even if some of the aforementioned acts were doing it more successfully or with a more obvious experimental edge.

Granted, the heightened emphasis on bass guitar, and the few existing lines of flute or string instrument are about as 'far out' as Cadaver's sophomore is willing to go, but overall it conveys a real sense of evolution that was not at all unwelcome. In retrospect, though the busyness and effort placed into this record are to be admired, and most of the tracks have at least a temporarily interesting or catchy twist, I do feel that the contemporary atmosphere and polish of ...In Pains has never really given me that same thrill of pathos and nostalgia that the debut evokes. It's a solid album, I'd hazard even a 'good' album, with an understandable appeal. More psychological and subtle than its precursor, unquestionably. Yet for the same reasons I'd rather be driving some vintage muscle car over a 21st century economy auto, I favor their first full-length. But if you've any natural predilection towards records like Human, Individual Thought Patterns, Testimony of the Ancients, Erosion of Sanity, Unquestionable Presence, Hallucinations, Considered Dead, or even Necroticism, then certainly check this one out.