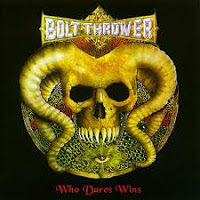 Who Dares Wins is a thrifty repackaging of two of Bolt Thrower's EP releases: Cenotaph, which corresponded to the War Master album, and Spearhead, released as part of The IVth Crusade campaign. For an added value, there are also two tracks included from Earache's fittingly titled Rareache compilation, which I've never actually seen in a store around my area for whatever reasons, thus living up to its name. Most album collectors in the 80s and 90s probably remember when it was par for the course that bands would produce maxi-singles or EPs with an album cut, a couple unreleased bonuses and some live material or remixes, and both of Bolt Thrower's offerings held to this formula. It was a far better deal to purchase the material in this incarnation, since you were getting an album's length worth, but in retrospect, since most of the rarer material has been included on reissues of the corresponding albums, the carrot has withered off its stick...

The most interesting components of the Cenotaph EP would have included the "Realm of Chaos" live cut, but the quality of the audio is rather terrible. Mostly you can hear the drums crashing along, Karl's guttural vocal emanating out over the space, and then occasional hints of the tremolo guitars, but to dub this a 'clutter' would be doing it too much honor. "Destructive Infinity" is a decent enough cut, but was available with the War Master CD edition, and "Prophet of Hatred", the best part of this particular EP, was already included as a bonus track on the Realm of Chaos CD. In other words, unless you were a cassette or LP whore, having never upgraded to the compact disc, this was all pretty useless. The Spearhead EP features an extended cut of its titular track, which doesn't add a lot of value or replay, and then a pair of tunes that were released on the US CD: "Crown of Life" and "Lament", the former which would have proven only filler if it had come out as part of the core full-length, since it offers little of interest outside of other cuts on that album; the latter rather a crushing bore with vaguely shifting riff progressions, only slightly more memorable. "Dying Creed" was also available on The IVth Crusade, so its inclusion on this EP was unnecessary and redundant.

I suppose if you were a fanatic UK death grinder, both of the original releases were more appealing, but the previously unreleased content felt subpar compared to any of the band's full-lengths to that point. In other words, its original delegation as 'padding' for short-form cash grab releases was appropriate to it. The two cuts from Rareache also come up short, even shorter, in fact. As with a lot of re-recordings of classic tunes, "World Eater '94" falls entirely flat. The riffing tone has been 'upgraded' to the meat of the ...For Victory sessions, with a bit of The IVth Crusade crunch, yet it seems dull and uninterested, where the original recording on Realm of Chaos was so oppressive, bleak and inspired as the wasteland surrounding it. The last track on this collection, "Overlord" definitely sounds like an outtake for the ...For Victory sessions, and its got the same balance of groove and melody, with a mildly exotic note progression. To be fair, it's likely the best unreleased track on Who Dares Wins, but that's not saying much, and after a few seconds of enthusiasm, it too peters out into a bunch of redundant riffing sequences that simply sound like other songs in the Brits' backlog.

Ultimately, while it might have seemed a pretty sweet deal at the time, that Earache would reissue the EPs, which had gone out of circulation, in a friendlier format for the audience's wallets, Who Dares Wins does not hold up as worth owning or even listening to. Unless, of course, you're interested in rehashed studio material, a shoddy live offering, and filler that wasn't good enough for the albums that it was eventually released on anyway...I'd rather listen to Mercenary than this, to be blunt.