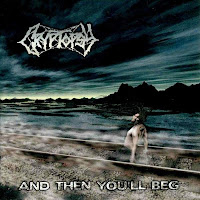 Around the turn of the 21st century, one might be excused for thinking that Canada's Cryptopsy had decided to stop being a death metal band and instead to start trolling the universe as some sort of freakish spectacle. Have you ever seen those inflated structures in which children jump around in a pile of balls? A 'bounce room'? And Then You'll Beg is essentially a more metallic version of that experience, and not one that I welcomed when I first got the promo for my old paper 'zine. In retrospect, the album is so hilariously unhinged that I can't be too hateful of it, because at least it presents some form of entertainment; yet everything from the shitty cover artwork to the spastic compositional excess just screamed of a band that had no idea where it was going, what it was doing, and perhaps where it came from.

I don't get the cover. Is this guy supposed to be 'begging' for someone to free him from the train tracks? Is he maybe a ghost, who has already been hit by a locomotive? I could never tell if that dust and wind was from the train racing away from him, or towards!? Granted, I have never much cared for Cryptopy's choice of artwork beyond the first two albums, but this is arguably the nadir (the recent s/t record also sucks to look upon). Unfortunately, though the band attempts to pump us up immediately with a pitch-shifted sample of Agent Smith in The Matrix, the only thing 'inevitable' about the music was that the band was taking a long walk off a short pier. It's almost as if they were trying to flirt with some thuggish approximation of brutal death metal while simultaneously trying to outdistance the dissonant, unusual theatrics of Gorgut's oblong epic Obscura. It's extremely technical, and extremely bouncy at the same time. There are a number of plausible riffs throughout the performance, and certainly no dearth of ideas, but let me be blunt: if you had put another logo on this record and then told me it was a collaboration between Psyopus, Hatebreed and the Insane Clown Posse...I just might have believed you.

Though I questioned and even defied the ire hoisted upon Mike DiSalvo for his performance on Whisper Supremacy, there is absolutely no defense for the guy here. His voice is being used at higher speeds, with a more grumbling, percussive meter, and he's even attempting to draw back a bit of Lord Worm's clownish, psychotic personality. But he sounds like a caveman being temporally displaced to front a spazz-core math metal project, and when he swears, like his infamous 'motherfucker take a bite of the poison' in "Voice of Unreason", I would fall out of my chair and laugh myself to hiccups, entirely incapable of taking the rest of the album seriously. The drums are probably just as busy as on the prior records, but they seem a bit thinner in the mix to the point that they leave a lot less impact on the skull. The bass lines are slappy, thick and funky, falling somewhere between Steve DiGiorgio and Korn, and while I actually kind of dug the technique on the older albums where the riffing was better, here it just sounds like another ring of the circus act.

Probably the worst of the instruments, though, are the guitars, which are weighed down by all manner of schizophrenic pacing and experimentation that almost unanimously fails to connect the listener to the album in any meaningful way. Shit be crazy, yo. We be pushin' the envelope! Dissonant, chugging sequences grope and bounce along into sporadic, frenetic bursts of repetitive insanity like "My Prodigal Sun" or "Shroud", but the actual patterns of notes just feel like half-formed ideas that they thought would be cool to put on tape and then loop around. At the very best, you're going to get some bristling tremolo picked bursts like "We Bleed" which actually seem more redolent of the old Cryptopsy that I enjoyed, but then even that track is ruined by the groove rhythm with DiSalvo's hoarse, jump da fuc up syllabic beatdown/breakdown accompanied by a faint, cheesy rasped counter vocal. Or how about the didgeridoo intro to closer "Screams Go Unheard"? An interesting idea they totally fail to capitalize on with a selection of shitty, spastic, broken deathgrind riffs.

It stuns me that people were so appalled at the later release of The Unspoken King, the band's 'deathcore' record, because for my money, And Then You'll Beg had already proven just how inconsistent and insipid the Canadians' choices could be. While Whisper Supremacy had its flaws, the band was at least standing upon the precipice of something larger...yet its corny, oddball successor seems like a misstep of monolithic, George Lucas proportions. Actually, I'll take that back, because I'd rather sit through another showing of the Jake Lloyd pod race than listen to this. Jar Jar poop jokes = a more fitting comparison. The elasticity of the instrumentation, while perhaps technically impressive to some, is just no substitute for songwriting, and I was rarely interested outside of, maybe the intro to the bizarre "Soar and Envision Sore Vision". As cathartic and confusing as it might have been, an album like Obscura is strikingly cohesive in its vision; whereas And Then You'll Beg is just young, dumb, and full of cum. A simian sideshow, a cacophony of clever monkeys, beating energetically on human instruments, but incapable of creating good music with them.