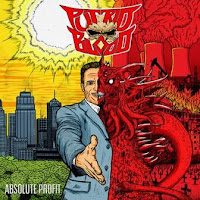 The chance of having some thrash renaissance to rival the latter half of the 80s is just about nil at this point, with so many modern practitioners pursuing mere tributes to their immortal precursors, but innovation and originality are not always achieved by swinging wide and far and hoping the blows still hit your opponent. No, some bands, like Serbia's Putrid Blood, just prefer to push directly through you. Roll over you. Break every bone in your worthless body. In doing so, they manage to infuse the core aesthetics of the genre with further extremes, and inevitably you are so busy fending off the punches that you won't care that the music is not some brilliant evolution of the medium. Absolute Profit is a drop kick of an album from a region I don't normally associate with thrash, but after sitting through this a number of times, and counting the ensuing bruises, I can only imagine that their geographical location might be the sole factor in curbing this infection. Fortunately, I got to stand straight in harm's way this time...

Though you'll hear picking progressions redolent of both West Coast US and Teutonic classics, like Slayer and Kreator, Absolute Profit is not exactly a nostalgia trip. It's got a modern potency that brought to mind bands like Dew-Scented, Demiricous, the early 'oughts records by The Haunted, newer Onslaught, or maybe the past few Slayer discs of the 21st century (in riffing structure alone, like the opener "Vulture"). A rich, ballistic rhythm guitar tone rains down thousands of tiny punches upon the ears, but keeps itself crisp and capable enough to hold together through the lighting rounds, when the picking comes fast and furious. The leads are wild, energetic and fun, often with a bit of bluesy wailing and wah to them which helps them stand out against the more straightforward violence of the rhythm guitar. Often, they will break out into these straight, punkish based chords that recall the angriest of NYHC, and occasionally you'll get a flight of death metal tremolo notes, a surgery ward thrash escalation, or a more black metal based, dissonant chord construction (bridge of "Re-Animator"); but for the most part, this is meaty, take no prisoners thrash which goes straight for your gut with a pair of brass knuckles. The only downside is that a few of the note configurations, like in "Kontraudar" or "For God's Sake", aren't distinct enough from hundreds or thousands of thrash, hardcore or brutal groove metal bands from the past.

That said, they've got some variation here to help break down the level of easy predictability. Not afraid to show their softer side (as on the clean guitar intro to "Re-Animator"), and within each track you'll find that the riffs tend to mix it up between speedier clips and mid-paced, neckbrace-inducing thrash sequences fit for any headbanger's ball. The drums and bass guitar are tighter than a pair of fists, with really snappy sounding snares and a good loud kick tone. Vocals are a monstrous mixture of angry thrash-core barks and death grunts with some slightly higher pitched black metal rasps and a few well-placed backing gang shouts which added a bit of a Slayer meets Hatebreed sensation. They're performed in a mix of English and Serbian, but either way you're still getting the message: these boots are about to kick you in the ass. The lyrics dabble in an array of traditional horror subjects like individuality, rebellion and horror themes, or at least those I could read; wisely avoiding the 'We're a thrash band dudes!' pizza-thrash flag-waving bullshit. This is not the Teenage Mutant Ninja Turtles, folks, but an urbane Serbian riot squad with beat-sticks ready to club anyone who gets out of line. Absolute Profit might not be the most unique or memorable album of its class, but its charm lies in the conviction and consistency of its aggressive architecture. Fun!