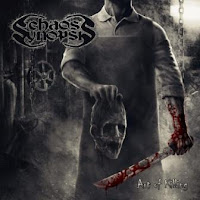 While serial killer themes have been previously enacted by extreme metal acts as diverse as Sigh, Dahmer and Church of Misery, it's great to see that Brazilians Chaos Synopsis have put so much research into the concept of their sophomore Art of Killing. It seems as if they really tried to get into both the heads and histories of each of the murderers they represent here. The footnotes included with the lyrics are helpful, and a number of disparate cultures are represented here, so this can be seen as an examination of sick fucks worldwide (USA, Poland, Japan, Brazil, Ukraine, Colombia, and so forth), which naturally contributes to a broader palette of splatter in terms of the imagery unleashed. I bring this up primarily because it's one of the more compelling components of the record, not that it lacks some inspiration musically, but the riffs and production border more along the familiar.

Branded death/thrash, Chaos Synopsis clearly favors the latter in terms of how they construct the music. The guitar progressions are very punchy and clean in tone, with a lot of mutes and simplistic chord structures that don't exactly break the bank creatively. Occasionally you'll get a evil if understated tremolo lick, as in the bridge to "Vampire of Hanover", and the vocals often accommodate a guttural bark, but the proximity to brutality is tenuous at best. Instead, you've got a spry, choppy selection of guitars redolent of other modern, polished thrash acts like their countrymen Torture Squad, Greece's Suicidal Angels or Germans Cripper. You could reach further back to the hints of Bay Area 80s Slayerisms, moshing potency of Anthrax and S.O.D., or the clinical picking tint of the European greats Destruction or Pestilence, but these aren't so prevalent that the album becomes yet another knockoff. No, they balance enough of their inspirations into a voice of their own, but I feel as if it comes with a cost: the production seems a fraction too sterile for such a savage amusement, and it often detracts from the level of abuse necessary to convey the chaos, pathos and tragedy of these killers and killings.

Granted, bassist/vocalist Jairo does a pretty slick job of capturing the anger and frustration through his blunted ravings, which sound like a street savvy, less raucous hybrid of Max Cavalera and King Fowley; but often burst into more grotesque growls or distorted, narrative samples. However, there's not a lot of inherent melody to his performance, and when the band tears off into a chorus-like sequence, the dynamics rarely differ. The drum mix is decent here, just as loud if not louder than the boxy rhythm guitar, but percussive enough that you can feel the kicks, snares and fills much like a knife being plunged between your ribs. Bass lines are about 50% following the rhythm guitar, and 50% layering in some fills to help break up the banal certainty that often comes with this genre. Leads are efficaciously sporadic, incorporating elements of hard rock and blues against a more surgical technicality; and interestingly, they're not highly drowned in effects, so you're getting a lot of the guitar's natural tone there. Flashy and noodly, but eerily appropriate.

Ultimately, since the focus here is so heavy on the riffs and vocals, the former are called to task to carry the rest of the load, and there just weren't enough that really stuck to me. Tracks like "Rostov Ripper", "Demon Midwife" and "B.T.K. (Blind, Torture, Kill)" are nothing to scoff at, capable of whipping necks into a frenzy, and fists into neighboring faces, in total 80s fashion. But Art of Killing comes up short in its lasting impact. Many of the songs just aren't as sinister as their respective serial killers, and the production is simply too clean to really convey heaviness or emotion. Chaos Synopsis can write their thrash riffs, and they have a solid sense of momentum that in of itself generates some excitement, but beyond that I didn't feel as if the music kept calling me back, like some grotesque snapshots of a murder spree crime scene which I could not look away from out of horror. Seasoned, dynamic and well-scripted, but the record lacked that extra 'oomph' to really drive up the body count.