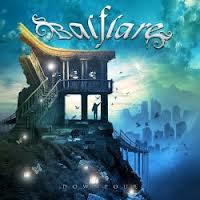 Balflare has always espoused a number of Japanese power metal stereotypes, but not necessarily to their disadvantage. With their fourth full-length effort Downpour, they tend to exaggerate these traits to the point that the album feels too processed and sugary to take seriously. First, there's the overt, romantic use of melodies, which is even more pervasive than past efforts like Tempest or Thousands of Winters of Flames. Familiar progressions in the guitars and keys remind me of a hybrid of J-pop artists and 90s Stratovarius, which would be fine if the writing was exciting, but here comes across too laid back due to the prevalent, washy synthesizer tones orchestrated with loads of strings, bells, and bright chiming pads that occasionally drown out the rhythm guitar to the music's detriment, and give one the impression that Tinkerbell is fluttering by. I suppose the title of Downpour is particularly apt here, because this disc sounds wetter than a buoy after being hit by tsunami waves.

Of course, there's nothing inherently wrong about setting this sort of mood, but Balflare seem to allow the atmosphere to do its own talking, and the songs just don't stand out from one another. At its core, the music is very much neo-classical European styled power metal in the vein of other Japanese acts like Galneryus or Concerto Moon. You get loads of shredding runs from both the lead guitar and keyboard, and most of these are managed with an effortless amount of skill, both performed by Syuta Hashimoto, a young virtuoso who has been at the heart of this group since their debut. Synth tones vary between full orchestra and a more proggy, Moog like vibe, which fans of 70s and 80s prog rock will undoubtedly take to. The drumming here is pretty bog-standard for this niche, with lots of driving double bass during the power sections, suitable for the rhythm guitar. That said, it took on a more machine-like aesthetic this time out, with a lifeless snare and kick setup that didn't really add much feel or emotion to the performance. The bass lines are predictable and rarely deviate from the familiar chord patterns, and the rhythm guitar, while chunky and harsh enough that its presence isn't entirely lost, serves as little more than a backbone to the hovering precipitation of the keys. A faint few memorable riffs breakout from the rainy din.

This is Eijin Kawazoe's third studio performance with Balflare, and not his best. When hanging in a middle register, as he does for most of the verses through the album, his performance is average, the strong hints of his accent carving themselves deeply into the English inflection. That's not a bad thing at all, but there is very little by way of interesting melody in his lines. Once he hits a higher pitch, the delivery is stronger, but pretty similar to a Timo Kotipelto with a few hints of Michael Kiske; just nothing special or unique. The lyrics are decently written, personal and loaded with that same 'take me away' sensation that the album's atmosphere carries; but a lot of the imagery and titles are pretty much a grab bag of cliches from bands like Angra, Gamma Ray, and Blind Guardian. All told, while I thought all the prior Balflare records were decent, exciting and loaded with potential, Downpour sets the bar a little lower. The first 4-5 tunes are tolerable, and the later instrumental "Rain's Realm" provides a window into their influences, but then you run into "I'm Your Shadow", a vapid pop rock drama redolent of X Japan's more forgettable work, and the last few cuts "From the Edge of Time" and "In the End of Journey" are also exceedingly weak.

Downpour isn't entirely terrible, and for a few moments grants the fantastical escape it promises, but its too wrapped up in its dreamy, cheesy haze to really prove effective. Compared to the latest Anthem, or the last few Galneryus records, for example, it seems soggy and limp. Newcomers to the band would be better off checking out their first two albums, which streamlined similar aesthetics into ballsier songwriting.