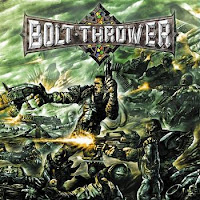 Though a chunk of me immediately wanted to write off Honour - Valour - Pride as a largely forgettable sequel to the mundane Mercenary, there were a few bullet points which raised it a few steps past its predecessor, not the least of which is the fact that this is the sole Bolt Thrower record without Karl Willetts' vocals. In general, though, I found the music here, as predictable and stagnant as it is structurally, to be superior in terms of the enthusiasm of the band, and the brighter production. I definitely took away a sense that the group was still lacking inspiration, that Honour - Valour - Pride offered absolutely nothing new under the sun for this once beloved British band, and that it was simply occupying space to keep the label happy, the fans content, and the band productive...

But, hey, space soldiers, right? I won't lie, when I first saw the artwork I was rather psyched that the band might offer a new spin on their Warhammer 40K phase, and at least in terms of the lyrics, they had returned to the grim futuristic warfare of that setting. Musically, though, it's simply nowhere near as brutal and grim as its spiritual precursor, Realm of Chaos. The production of the guitars and the exorbitant use of engraved melodies against the pummeling rhythm progressions are straight from The IVth Crusade/...for Victory era, which is likely a thrill for the many fans of those eras, but I was crossing my fingers for something else. I do appreciate that they waylaid some of the lame, 90s groove influenced elements from the prior album; while they still exist to a point, this is far more of a 'death metal' experience overall, and thus denser, busier and more intense, even if numerous of the tracks could be interchanged between the two records. A lot of the writhing tremolo rhythms here are subtly more ominous and aggressive than Mercenary, but despite that the songs just really fail to achieve that next level of compulsiveness.

I realize a lot of people weren't too happy that we wound up missing out on a Martin van Drunen-fronted Bolt Thrower, myself among them. In retrospect, we have gotten Hail of Bullets and Drunen's return to Asphyx, which definitely help scratch that itch, but to be honest, I can't imagine his presence over these specific songs would have greatly enhanced their value. As for Dave Ingram, he was a natural choice to fill in for Willett's empty seat, having a comparable, garbled guttural timber and a load of experience on the English death metal scene. Not to mention, Benediction were pursuing a parallel path to this band in how they constructed simplistic death metal with few frills. I have numerous friends and acquaintances that disdain the album for the very reason that they don't enjoy his performance, but he's not at fault for my underwhelmed reaction to the music. A bit more growling sustain than Karl had on Mercenary, and instantly identifiable if you're familiar with records like The Grand Leveller or Subconscious Terror. On the flip side, he doesn't really generate anything more than what you'd expect; Ingram does not elevate himself to fit this opportunity he was given. If you didn't like him before, you wouldn't like him here, and like on Mercenary, the vocal production was very parched and dry, with less depth than the music behind it.

Otherwise, Honour - Valour - Pride sounds pretty damn good, with a better balance of drums and rhythm guitars than its predecessor. The snares, toms and crashes slash straight through the crisp tone of the axes, and you'll get a lot of subtle if striking leads and frilly feedback to create another layer to the experience. The riffs pursue the same balance of death/thrash, grind stretched out to a taffy-like consistency rarely pushing beyond a mid-paced gait; while cuts like "Pride" rely heavily on those same, baleful melodies the band had been spewing forth since War Master. The tone of the bass is also more appreciably corrosive. Granted, as with Mercenary, I find it painful to recall individual tracks, because there's just nothing here as inspired as a "Drowned in Torment", "As the World Burns", ...For Victory" or even a "What Dwells Within". Most of the rhythm progressions are recycled and slightly tweaked so that they're not cases of precise self-plagiarism, and the lack of striking riffs does tend to blend the material together. However an unassuming Bolt Thrower experience this album proved, though, I still found this a more interesting 45 minutes than the previous album. The architecture is comparable, but the songwriting was slightly better arranged. It's an 'okay' disc, the problem is that 'okay' is just not good enough for Bolt Thrower. Thankfully, the next time out they'd remind me just what it was about the band that I so loved in the late 80s.